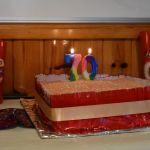 Crawford Lindsay reports:
"August 1 was the date chosen for an informal ESOC social at the 6-Days. It was also the 70th birthday of Malcolm Humphrey, so there was something to celebrate as well. The venue was the splendid Aboyne & Glen Tanar Memorial Hall (known as the Victory Hall), not far from the orienteering that day at Birsemore Hill. A large group of ESOC members, from the very young to the not so young, gathered with their takeaways from 18:30. After the main course, we all enjoyed the special birthday cake Fran Humphrey had baked and transported to Deeside.

Then the fun began; there must have been 70 balloons, which were blown up and thrown about by kids of all ages. Fran had organised a quiz, and it helped to have youth in the team, as some questions were only for them. Luckily for me, there were two in my team and we were high scorers. We then played an orienteering variation of musical chairs, except no one dropped out if they couldn’t get a seat. This got people up and moving, so to calm things down, the final game was to construct a tower using cocktail sticks and marshmallows - the highest tower won. Our team was a little hampered by Maja eating the building blocks. It was a good evening; thanks to Fran for organising it at short notice." 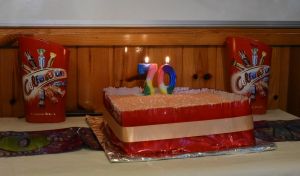 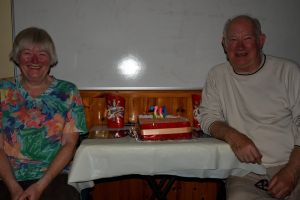