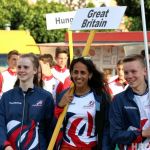 ESOC junior member Rachel Brown (W16) was selected  as part  of the British Team to attend the European Youth Orienteering Championships (EYOC) in Belarus from 27th - 30th June 2019. This was her first international event in GB colours.

The event was based around Grodno in Belarus and the team set off early on Thursday morning to fly to Vilnius in Lithuania, and then travelled by coach to Belarus. In temperatures above 30 degrees the long wait at border control to enter the country was not appreciated by the team. Thursday gave the team the chance to register and check out the model events, to get an idea of the type of terrain they would face.

The first day of the competition was the Long race in the forests of Sapotskin.  Rachel (and the rest of the GB team) were confronted with a largely green map and struggled with relating the map to the ground. Rachel commented that the mapping of the contours included a lot of additional form lines, which were used in a way she was not familiar with, and that even the major paths mapped on the map were little more than elephant tracks.

The Saturday then brought the relay competition at Starina where there were M16, W16, M18 and W18 categories with 3 runners in each team. As Rachel was the only W16 in the GB team and there were only 2 M16 runners - Joe Hudd and Jim Bailey - Rachel joined up with them to be the 3rd runner in their M16 team. Jim and Joe both had strong runs and Rachel set off in 4th on the final leg. She had a clean run and returned for the team to finish 7th.  Given that she was racing against M16's this was a tremendous result, although she was slightly disappointed not to have made 6th place (they were 40 seconds down) and the chance to stand on the podium with all the boys.

The final race on the Sunday was the Sprint race in Grodno. The British team all selected early start windows to try to avoid the higher temperatures later in the morning. Rachel set of strongly but a mistake towards the end of the course, cost her about 40 seconds. She was to finish 20th (out of 92) in the W16 class.

More information and links to all the results are on the EYOC website.

Rachel, and the rest of the team, appreciated the fantastic help and support they were given by the team coaches and in particular Rona Lindsay from ESOC.
Rachel really enjoyed the whole experience and is looking forward to hopefully getting more opportunities to run abroad in the future.

Congratulations Rachel on a successful debut in the GB colours. 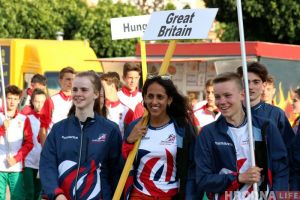 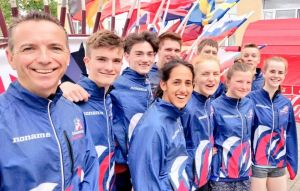 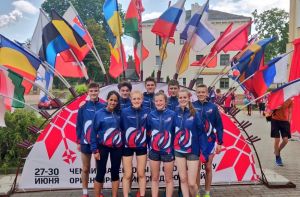 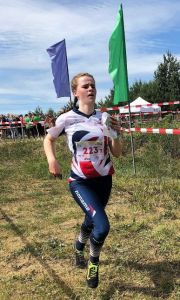