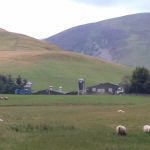 16 members ventured out of Edinburgh and headed for the hills beyond Peebles. The first challenge was to find the Garnett house which is in a lovely setting in the Manor Valley.  Roger provided maps and gave guidance about routes for different abilities.  Ewart commented on how long it took everyone to get themselves sorted out and off.  Though the first two, who each went off on their own, left well before everyone else – not having to consult with anyone!

So we split up into 1s, 2s and 3s going in different directions with different amounts of climb. Soon we noticed that the sky was looking ominous to the south. Was that a few drops of rain we felt? As we got higher we could see the weather coming in. But most of us got back without getting wet. It was a good job we'd admired the view over to Cademuir before we left as it had more or less disappeared when we got back, disappointing those who had hoped for a nice sunset.

We were joined for the second half of the evening by a couple of non-runners including a visiting relative from Derbyshire. And whilst we were out Clare had been out in the garden picking lettuce – how much fresher than that can you get?  This was added to the buffet to which everyone had contributed. As usual, without any co-ordination there was a reasonable balance and variety of savoury and sweet dishes, though we got the quantities a bit wrong. But although we tried, the buffet defeated us, so doggy bags were needed.

Thanks to Roger and Clare for once again giving us the opportunity of enjoying the Manor Valley.

Photo: Looking towards the end of the Manor Valley from close to the road.  By this time the weather was deteriorating. Perhaps someone has a better photo? 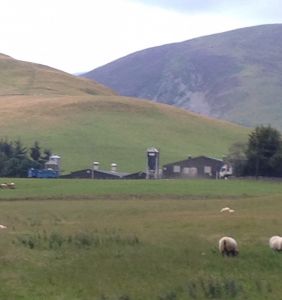