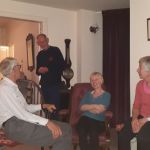 Ewart Scott reports on the ESOC outing to the Manor Valley for an evening run on Monday 12th August.

"Just over 20 ESOCers, past and present, gathered at the Garnetts' for the annual Manor Valley run, later described as one of the “classic” ESOC socials.

Various small groups and individuals set off for different runs and walks.

The long route leaves Glenternie heading south in a clockwise direction following the orange dots, see map extract. This is about 9 Km. A shorter route from the forest corner approximately follows the blue dots back to the valley. The area just west of Glenternie was awash with shorter runs and walks. There was even an antler collecting party!

Very heavy rain fell on the drive from Edinburgh, but with only a very short and light shower during the run, we were blessed with a very fine evening. Those fortunate enough to reach the ridge were treated to excellent views looking west into the setting sun.

Following the run and joined by Graham and Ros Pyatt, we were treated as usual to a wonderful spread in very relaxing surroundings, rounding off another successful ESOC social.

As usual, our immense thanks to Claire and Roger."

Photo taken by Claire Garnett of a few ESOC members relaxing after the run. 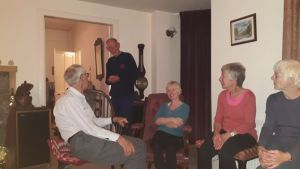