The British Night Championships were held on Saturday 24 February, at Merthyr Mawr. This is a National Nature Reserve on the South Wales coast near Bridgend. It has the highest sand dunes in Wales, and a huge range of plants and wildlife. The terrain is mostly open - rough grass with a lot of spiky vegetation, patches of sea buckthorn, willow and birch thickets and many paths throughout the area (not all of them mapped). The last few controls were quite a contrast, in coniferous woodland. The weather was clear and cold, with a light wind, and underfoot conditions were mostly dry, often very sandy.

On Sunday 25 February, there was a Welsh League event at Pembrey Country Park, further west along the coast, near Llanelli. Here the terrain included forested dunes, parkland and open dunes. This was formerly the site of a Royal Ordnance Factory, and there are still old railway lines visible, and some bunkers and tunnels, which provided unusual control sites. The forest was quite brambly, so the best routes were along paths. The weather was again clear and sunny all day, with a cool breeze, and it was very dry underfoot.

Results are available on the Pembrey Forest results page of the Swansea Bay Orienteering Club website.

The SBOC website also holds Routegadget for both events.

These events were the third and fourth in the 2018 UK Orienteering League - more details about this league are on the UK Orienteering League page of the British Orienteering website. With these events included, ESOC is now lying 3rd in the club competition. The score for each club is calculated automatically from the 15 best club members' scores (across various age class groups) - so the club members whose scores are included will change as the year goes on. 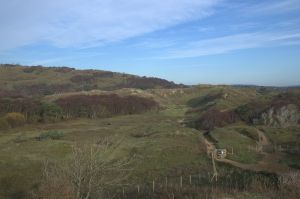 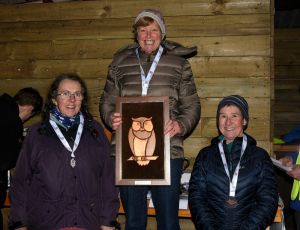