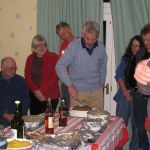 It was great to see so many people braving the snow and slippery pavements to come to this year’s Burns Social at the Fawthrops’ house. The run was themed around battleships, which gave a score event with a difference; whether a control was a ‘hit’ or not affected your strategy.

There is no doubt that the conditions were awkward, and everybody covered a much shorter distance than they would have done otherwise. The short and long courses were based on the same grid. Anyone running the short course was given more hints as to where the ships were in the board.

After the race a traditional Burns night followed. We imagined the pipes as Peter Fawthrop brought the haggis in. Peter Coutts addressed the haggis, and we all tucked in. The food was delicious, and the dishes were all empty in a very short time. The spread of puddings afterwards was very impressive. Many thanks to all the volunteer cooks.

After dinner, Brian toasted the lassies. Slightly embarrassingly, none of us had prepared a reply. Oops. I suppose there’s always next year… 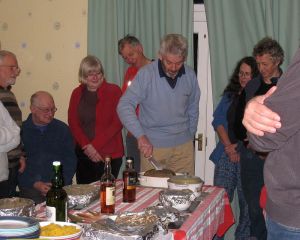