Before moving on to talk about orienteering at Technical Difficulty (TD) 5, this article looks back at what we have covered so far, emphasising that most, if not all, navigation techniques are important at any level of TD.  Your own progression in the sport will probably take place over a few years, regularly reusing key skills.

To start with you might like to revisit the basics at the YouTube videos produced by the athletes who represent GB at the international level, in this news item on the Coaching/Training page of this website.

It is always important to practice basic skills. An example is use of the compass – at TD1 (White) level the compass might be used to set the map and no more; at TD2 (Yellow) it might be used to check you are heading off in the right direction from a track junction; at TD3 (Orange) it is commonly used to cut across a block of terrain on a rough bearing; and at TD4 (Light Green) you will be using it for both rough and fine navigation, the latter, for example, to navigate the last part of a leg into a control from your attack point. Another basic skill is distance judgement – at TD1 it is unlikely you will pay much attention to distance because you will encounter controls at regular short distances; at TD2 some judgement of distance is useful, such as when you must pass one track junction to reach the one, say 50m further on, where the control is located; at TD3 and above, distance judgment is important because leg length between controls becomes quite variable. Also at TD3 and above, the distance from a line feature or your attack point to the control should be estimated from the map and then executed over the ground. 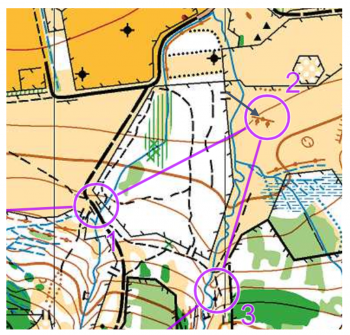 Here is the example of a TD3 (Orange course) leg that we looked at before: the last part of the leg into control #2 from the attack point at the gate is on a bearing of SE and at a distance of about 100m (blue arrow).


However, perhaps the most important of all skills, introduced at Step A and invaluable at all Steps through all the technical difficulties, is orientating the map – keeping the north edge of the map orientated (or “set”) towards magnetic north (the north lines and arrows on the map are aligned with magnetic north). 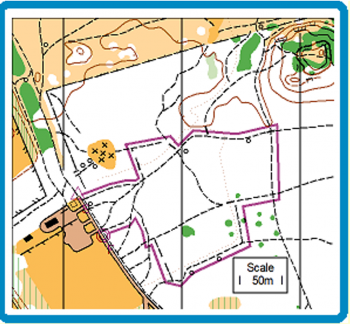 I would suggest you practice this as often as you possibly can until it is second nature. As the Step System indicates, setting your map can be done using your compass or by aligning your map with what you see around you in the terrain. Here is a line course round paths in Yellowcraigs plantation (purple line) that would test your ability to keep the map oriented as you change direction; but any map walk with a lot of changes of direction provides good practice.


The Step System of increasing levels of difficulty is something that we have been using in all these articles. The Step System
Its name reflects the fact that navigating is a systematic process using several different skills. Every leg of a course is successfully executed in a systematic fashion. Unfortunately, this approach seems to take some of the gloss off the experience, which should be fun, healthy, at one with nature, feeling relaxed, etc. On the other hand, for many of us, it is the technical challenge that is appealing. Either way, systematic is what you are being when you execute a leg. We have some acronyms that help us to be systematic. Perhaps the most commonly used one is CARE (Control, Attack Point, Route, Execute), and it applies at all levels of technical difficulty, even at TD1 where it might entail setting and interpreting the map, following the correct line feature and identifying the next control site.

Control.  Before embarking on the next leg of a course make sure you know what you are looking for at the next control by reading your control descriptions and relating them to what you see on the map. You might be able to visualise what the control feature will look like.  Here’s an example from the first two controls of an Orange course at Ravelston Woods. #1 is on the west end of a short section of ruined fence beside a path, and #2 is on the west side of a 1.5m boulder on a low spur, just below some large crags. 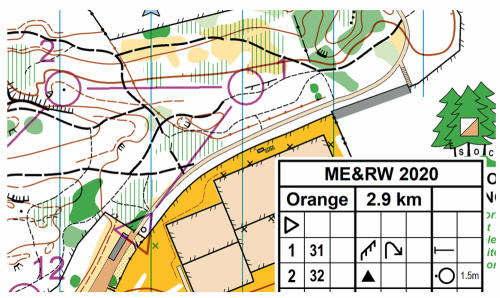 Attack point.  Your attack point for the next control is chosen to be relatively close to the control, ideally no more than c.100m. It should be an easily recognised feature e.g. gateway, stream bend, large crag, etc. and providing a good route into the control. In the example on the right, taken from the Blue (TD5) course at the Edinburgh University event at Holyrood Park, runners coming from the northeast to control 12 may well have followed the path network to the path crossing about 30m southwest the crag – a very easy attack point, in this case situated beyond the control. 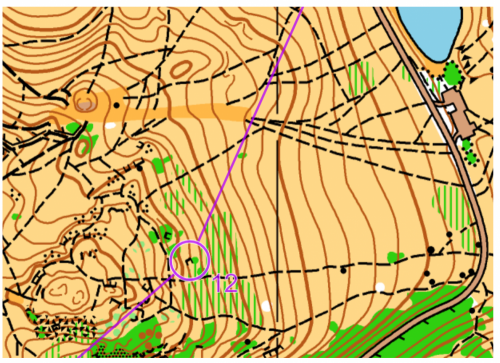 Route choice.  There might be a little bit of route choice on a Yellow (TD2) course, but on Orange (TD3) and more difficult courses there will be increasing amounts of route choice to your next control. The criteria for choosing the best route will be length of the route, nature of the terrain for running, ease of navigation (easily identified features en route will allow you to check your location), your own skills level, technical and physical, and how tired you are.
Here is a very instructive example of route choice taken from Route Gadget for recent ESOC event at Corstorphine Hill. 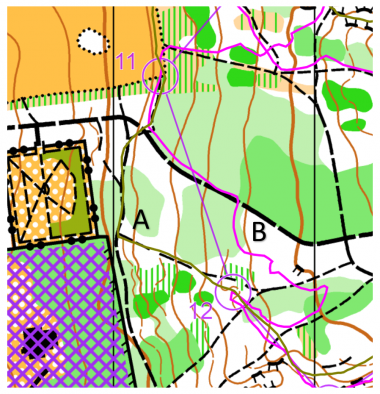 Leaving control 11, runner A takes a safe route via paths (green line) and arrives at control 12 safely (no need for an attack point as such). Runner B takes a more risky route that cuts across a block of woodland (purple line), potentially shorter, but misses the control, ends up too far east and has to double back. Why did runner B make this mistake? Almost certainly because the major NW-SE track that he used has no clear features along it to check the location at which to cut through the wood. Also, what was his attack point?


Execute.  On your route you will be using map to ground and ground to map navigation as you go, i.e. checking off easily-identified features in the terrain where and when you expect them. There will be parts of the leg where you can move quite quickly and other parts where you might need to take care with navigation – what we call “Traffic Light Orienteering”. Ideally, this all goes according to plan, but if it breaks down, stop! You might be lost or simply moving a bit too fast so that your navigating speed hasn’t kept up with your running speed. If, on looking around, you don’t recognise the features you were expecting, you’re probably lost. We have not discussed the skill of relocating, which comes into play if you are lost. I’ll pick up on that in the article on running a TD5 course.