Orange begins the transition from White and Yellow courses (Technical Difficulties (TD) 1 and 2) to Green and above (TD5). On Orange courses you will probably be entering Stage 3 of the Long Term Athlete Development framework, becoming an orienteer looking to improve and regularly training to do that. (See the introduction article for details of the Long Term Athlete Development framework, and also the Step System, mentioned below.) Beginner adults often begin with an Orange course. As regards length, an Orange course would normally be between 2.5km and 3.5km long, with some running over rougher ground. Individual leg lengths can be up to about 400m. 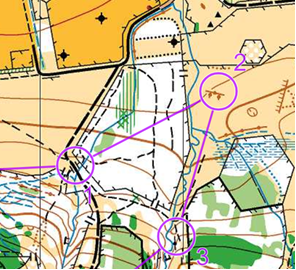 Orange courses are at TD3 and will have some controls away from line features, possibly not visible from a line feature. However, they will not be far away (typically 10s of metres) so that the runner can safely reach the control from a line feature and move on safely to a line feature. The map extract on the right shows a good example of a leg from an Orange course. Control 2 is away from line features but it’s in an open area surrounded by line features so that the runner is unlikely to get lost. It requires a short run of about 70m or so across open ground at the end of the leg to reach the earth bank on which it’s located.  On leaving control 2 there is then a short run to reach a line feature en route to control 3.
On the Step System the new navigation techniques that come in here are route choice (although a Yellow course might offer a bit of this), attack points, compass directions, and aiming off. The leg to control 2 illustrates most of these: 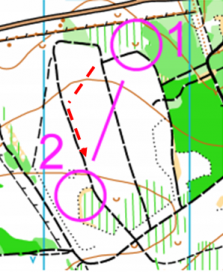 The map extract on the left illustrates a technique called aiming off, which allows a runner to safely cut corners (rather than running a longer distance round paths). The red dashed line shows a time-saving route. The idea is to deliberately aim for a line feature to the left or right of where you want to be on that line feature. In this example, you might choose a route that takes you west from control 1 to the path T-junction, but then cut across southwest, using a rough compass bearing to go about 75m to the N-S track further west, thus aiming off to the right of control 2, to make sure you joined the track north of the control, and turn south (red dashed line). This is safer, and probably faster than trying to go straight to control 2 along the purple line.

So, on that basis, what are some coaching and training suggestions? Here are two training exercises you can do without a coach, although discussing them with a coach would provide added value. They incorporate compass work, pace counting, attack points and cutting corners.

Compass directions and distance judgement. These are two of the most valuable navigation techniques in the “orienteering toolkit”, and so it is wise to be very diligent about learning them. At Orange level, compass directions takes us beyond using the compass simply to set the map to north, to using the compass to identify north, northeast, east, southeast, etc, and even in between, e.g. north-northeast. Distance judgement is facilitated by pace counting, which is knowing how many of your paces are needed to cover, say, 50m or 100m. The two techniques used together ensure you reach the vicinity of the control from an attack point.

For the exercise, find an open or lightly wooded area (parkland?) that has a map, ideally an orienteering map but not necessarily. Choose three or four features (buildings, benches, trees) and measure their compass directions from each other and how far apart they are (50-100m is best). Now start jogging between these features using the compass directions you have and counting how many paces you take (or double paces, counting only your right or left foot). Keep a note of the number of paces and thus, knowing the measured distances, calculate your pace length (one pace might be about 1m).  If you are using directions that take you uphill or downhill rather than across flat ground, keep a note of that as well – your pace length will differ, shorter or longer respectively.

Now choose three or four other features and measure how far apart they are. Calculate how many of your paces it will take to cover those distances. Using their compass directions, jog between the features for the number of paces you have calculated. How close to your target feature did you get? You could be left or right (compass direction) or short or beyond (pace counting). Within 1m? 5m? 10m? If you are within 10% of the distance from your starting point you’re doing well. Practice makes perfect with both compass and pacing.

Aiming off to cut corners. To practice this technique you could use ESOC’s Dalkeith Park map (out of town, but not far from Dobbie’s Garden Centre for refreshments). Here is an extract of the map with a short 1.6km Orange course to try some aiming off and cutting corners. For example, from the Start to control 1 you might use as your attack point the junction between the minor road and path south-southeast of control 1, and from there go on a compass direction of due north for about 80m to the wall just to the right (east) of the control. The control is round the end of the wall on the fence. Easy! For 3 to 4 – which way would you go round the green block of forest? Either way, there are opportunities to cut across blocks of woodland to the next path.
If you would like a pdf copy of the Dalkeith Park exercise for your own training, please email me: . 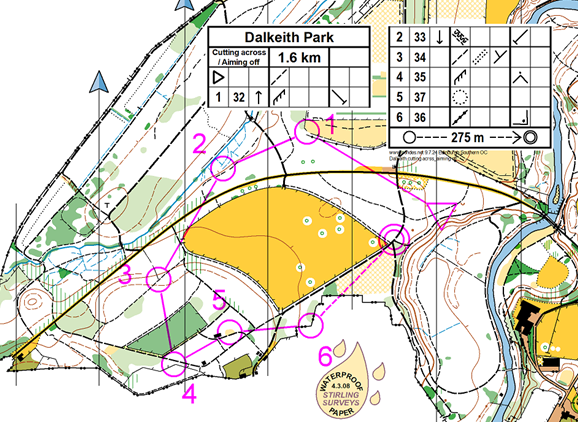