Light Green (Technical Difficulty (TD) 4) continues the transition from White and Yellow courses (TDs 1 & 2) to Green and above (TD5). You will also be progressing from Stage 3 to Stage 4 of the Long-Term Athlete Development framework, becoming an orienteer who is regularly training, improving and probably enjoying a bit of competition at the same time. (See the introduction article for details of the Long Term Athlete Development framework, and also the Step System, mentioned below.)  As regards length, a Light Green course varies between 3.0 and 4.0+km, depending on terrain type and how much time is likely to be spent running over rougher ground. Individual leg lengths might be up to as much as 1km, but with more variety in the length of legs around the course.

On the Step System, the new skills that come in at Light Green are navigating by contour shapes, accurately navigating on short legs, an ability to employ different navigation techniques as you progress along a longer leg (e.g. a mix of using contours, rough and fine compass bearings and collecting and catching features to get from control A to control B) and, associated with that, making more difficult route choices. Collecting features are obvious features in the landscape you might aim for en route, e.g. a distinctive hill; catching features are obvious features in the landscape that “catch” you if you go beyond where you want to be, e.g. path, stream, marked change in slope of the ground, vegetation boundary.
Here are two extracts from the Light Green course at the ESOC event on the North Pentland Hills in September 2019 that illustrate these points, with likely routes shown by the dark blue dashed arrows. 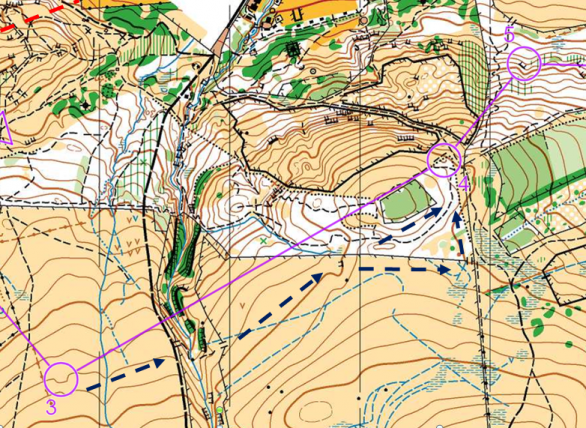 #3 to #4 is a longish leg of about 800m, followed by a much shorter leg to vary leg length. Use the gates to cross the fenced enclosure around the stream and then taking a rough compass bearing to northeast, follow the line of the contours to avoid climbing up the side of the hill, aiming for the fenceline (acting as a collecting feature) round about the location of the small crag; there is then a route choice – over the fence and onto the path round the hill that leads you into the control site (a small depression), or east along the fence line to the gate and north along the vegetation boundary into the control. N.B: no need for an attack point as such for this control, because the line you run leads into the control site. 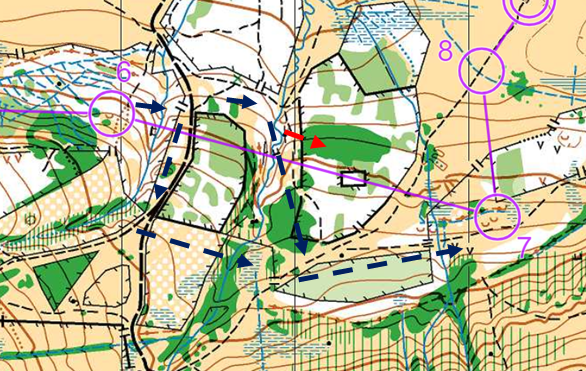 #6 to #7 is a leg across complex terrain that requires a high level of concentration, but can be executed almost entirely along line features. This leg is a case of inspecting the map carefully before setting off, heading for the gate east of #6 and then choosing your route: either following paths down across the stream and up the other side, i.e. east and south, or following the bigger track south, turning east around the end of the fenced enclosure (keeping an eye on your compass to make sure you follow the right paths). Continuing east, the control location is a small depression on the left (north) of the path about 100m after passing through the last gate (probably about 50 double paces).

You will have noticed that orienteering maps include contours at a detailed level. While paths come and go, and vegetation boundaries change, contours remain constant: because they are mapped from photogrammetry or LIDAR (Light Detection and Ranging), they are accurate. Therefore, where they define distinctive topographic features, they are valuable navigation aids. Around Edinburgh, there are several orienteering areas that display some contour detail – Blackford Hill, Bonaly Park, Castlelaw, Holyrood Park, the North Pentlands above Swanston village, to name a few.
However, matching the shape of the landscape to contours on the map (what we call ground to map interpretation) and vice versa (map to ground interpretation) is not always easy, even if you have good three-dimensional visualisation. Therefore, I would suggest that to begin with, a map walk or jog in a contour-rich area is a valuable learning exercise. Holyrood Park has both large scale and small scale topographic features, and is a good place for a walk or jog anyway! 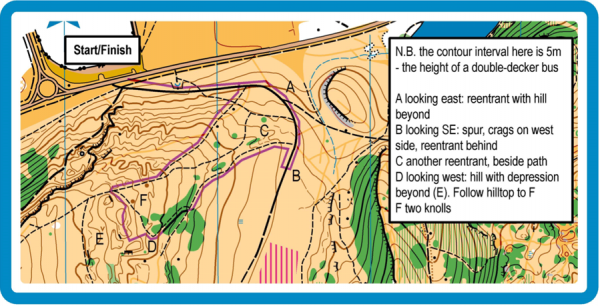 Follow the purple line on this map extract, taking your time, looking left and right, even stopping to make sure, relate the topographic features (labelled A to F) to the contours on the map. And vice versa, if you see a contour shape on the map that intrigues you (just north of F?), go and take a look at it – can you identify the feature on the ground?
This sort of exercise can be adapted to any area with lots of contours.

As you develop as an orienteer, you should be taking opportunities to practise essential navigation skills, and local or regional events provide such opportunities. Most local and all regional events include a Light Green course (or similar).
At this stage, you might also like to receive some armchair coaching by looking through the videos on British Orienteering’s YouTube channel.