All four of these courses are at Technical Difficulty 5 (TD5) on the Step System. They increase in length and physical challenge from Green (usually about 4.5km long) to Black (in excess of 10km, and likely to be visiting remote and/or physically demanding terrain). The key additional skills at TD5 are greater use of contours for both rough and fine navigation and attention to route choice and execution on longer legs. However, a key skill not mentioned anywhere in the Step System is the ability to relocate if you get lost, and the more difficult your course, the more likely you are to be unsure of your location at some point, even if not actually lost.  We will look at relocation first.

Part A.  Relocation
Like other areas of navigation, the process of relocating is quite logical and systematic.  All books on orienteering technique describe the process, and reflecting its importance, in Carol McNeill’s excellent book "Orienteering: skills, techniques, training", relocation has more entries in the index than any other technique. We will come back to the process of relocating in a moment, but firstly it’s useful to understand why you might get lost and how you come to recognise you are lost.
All the coaching or training for orienteering you do is to perfect your navigation skills so that you don’t get lost! However, maintaining concentration for the entire length of a course is hard, especially at TD5. You might relax your concentration a bit on a long path run between controls or by running on a rough compass bearing through a block of forest to reach a clear catching feature. But even in these situations there is the possibility of getting lost, e.g. if you miss an important check-off feature on the track run or you become lax with your compass bearing. It is, therefore, important to be alert to whereabouts in terrain there is a danger of getting lost. Here are a couple of examples, taken from Routegadget.

Example 1: For runner B, the run on the main track did not offer any clear check-off features. 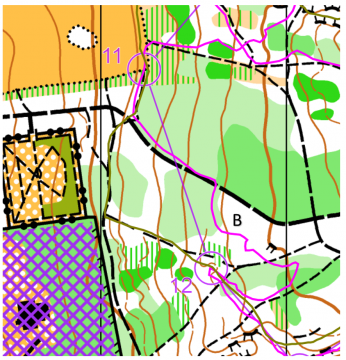 Example 2: The runner (orange line) was faced with an incredibly difficult first leg, diagonally upslope with few distinct contour features and through a boulder field, requiring very accurate compass and pacing from the start. (N.B. North lines on maps are normally 300m apart.) 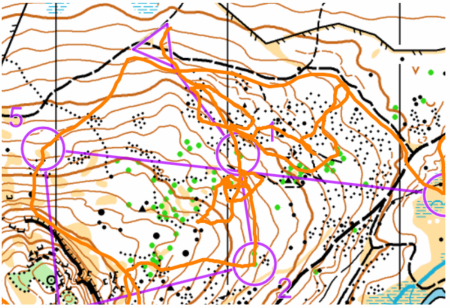 Here are a few more situations in which there is potential to get lost:

​It might be tempting to generally reduce your running speed to keep in constant contact with the map. However, there is a balance to be struck between making good progress where you can and slowing down where there is a danger of getting lost. This is where you would practice traffic light orienteering in response to the navigational challenge. Also, before an event it is useful to do some homework on the difficulty of the terrain you are likely to visit on your course, using hints from the event details and routes on Routegadget from previous events, and even looking around on your walk to the Start. A further hint – always be cautious on the first leg of a course to warm up navigationally.

Recognising and acknowledging that you are lost should be sooner rather than later. As soon as features on the map and features in the terrain do not match up as you expect, slow down to check, and then if they still fail to match up, stop! Textbooks suggest it should take only a few seconds to go through this process. This is something that can be practiced – see below. Once certain you are lost, the process of relocation comes into play. It is important you don’t run around like a headless chicken and you are systematic about relocating. This sequence of actions is adapted from Carol McNeill’s book, but all textbooks contain something very similar.

The most common training exercise to practice relocation is done in pairs with one map marked up with a course (dark blue on the map) and larger circles around the control locations (light blue). Runner A leads off with the map while Runner B follows, observing the main terrain features, noting the direction of travel and judging the distance covered. Runner A stops somewhere within the larger circle round the first control and hands over the map for Runner B to relocate and take the pair into the control. A and B then swap roles and the pair works its way round the course taking turns with the map. This exercise can also be done without a course on the map, visiting controls in any order: A leads for a while, B relocates, B leads for a while, A relocates, etc. The short example shown below is on the new ESOC Castlelaw map. 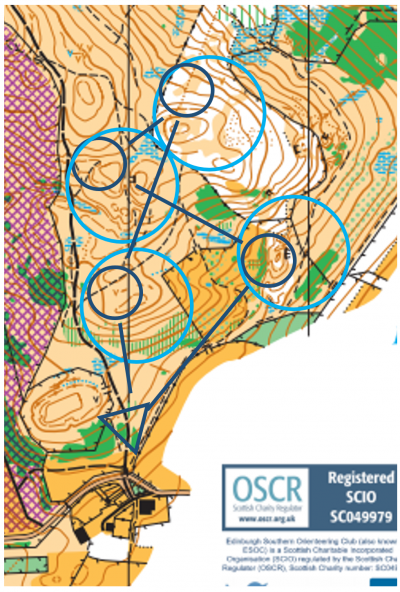 Another exercise that you could do while observing COVID-19 restrictions is to take out some of your old maps and grade parts of the map red, amber or green according to how you judge the  danger of getting lost, either along your route round the course or across the whole map. If you have family members with you, you can all do this, compare your gradings and discuss.

Returning now to TD5 courses, here is a basic list of some of the challenges you might face:

Here is an example of a good TD5 leg from a recent event on an open fell area in the Lake District. #1 to #2 is a leg almost 900m long. It starts at a point feature (knoll) and finishes at a small crag. What would your route be from 1 to 2, and can you identify a useable attack point for #2? Whereabouts are the danger areas for getting lost bearing in mind you are navigating solely on rock and contour detail? We can see that #7 and #8 are also on point features. A number of short legs with direction changes towards the end of a course is another significant navigational challenge. 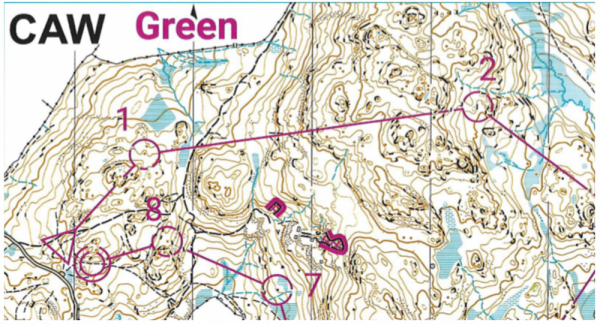