The 2018 CompassSport Cup and Trophy Final took place in the northern part of Cannock Chase, near Stafford, and was organised by Walton Chasers. Most of the ESOC team travelled south on Saturday 20 October, on a bus arranged by the club, stopping off on the way for some training at an event in Lancaster (organised by South Ribble Orienteering Club) and staying at a Travelodge in Stafford overnight. Others made their own way to the Midlands, some staying on for a long weekend.

Helena Nolan, ESOC Club Captain, commented: “As a club we qualified for the CSC final in Cannock Chase on 21st October and entered 57 people which is a fantastic feat given the travel that was involved. We had a great weekend with some people running courses for the first time, e.g. Megan Brown (W10) running Orange and Juliette Maire (W21) who ran Blue - both were counters for the team.  There was a great team spirit with lots of cheering. The club finished 10th in the Large Club competition. Well Done and Thanks to everyone who competed or supported.”

Haywood Warren is a flat plateau dissected by steep-sided valleys, with many spurs and reentrants, and a network of paths and tracks throughout, including some small, winding mountain bike tracks. The forest is a mixture of coniferous plantation and deciduous natural woodland and there are some open areas. There was deep bracken in places, and many brambles too, so it was often best to stick to paths and tracks as far as possible. The weather was fine, clear and sunny, so it was very pleasant, with beautiful autumn colours in the deciduous woods.

ESOC were competing in the CompassSport Cup (the competition for large clubs) against BOK, DEE, DEVON, DVO, FVO, LOC, NOR, SLOW, SO and SYO. The scoring is complicated - for a full explanation see the CompassSport Cup Coordinator’s webpage. The younger ESOC juniors ran colour-coded courses.

Full results, Routegadget, and further details about the event are available on the CompassSport Cup Final page of the Walton Chasers website. The results include the team scores for both Cup and Trophy, and there’s also a link to photos featuring many ESOC runners. 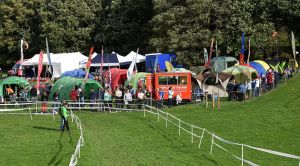 View down the run-in