ESOC had qualified for the 2020 CompassSport Cup Final in March 2020 (see this news item) but the final was postponed due to the Covid-19 pandemic. After various changes due to problems with permissions, the 2020 final was presented by South Yorkshire Orienteers at short notice.

The event took place at Tankersley Woods, north of Sheffield, which had been the venue for a previous CSC Final in 2016. On that occasion, ESOC had a large team, but this time we did not. Some of the team travelled on a minibus arranged by the club, and others made their own way there. Most met up for a meal on Saturday evening.

The competition area is long and narrow, very complex terrain, with an industrial past that included mining for coal and iron, as well as factories and railways that were bombed during WWII. The terrain has many pits, depressions and small hills in mixed woodland, criss-crossed by a complicated network of paths. There were a lot of low brambles and other undergrowth. The Arena was in Hesley Woods, at the east end of the area, and the longer courses had timed-out road crossings, taking them into Parkin Wood and Tankersley Woods further west. The weather was very wet early in the day, but luckily the rain stopped for the duration of the competition, and the sun came out later on.

The Arena had a good atmosphere, with club flags and tents along the run-in, and the new ESOC tent had its first outing, decorated with ESOC bunting. The commentary enlivened the day, and there was a club kit competition. Most clubs took this at face value and simply entered the parade wearing club tops, but Walter and Vicente pulled out all the stops - Vicente wore not only the club top but also a kilt, with an ESOC hat and scarf, accessorised by a 6-pack of Irn-Bru and a Tunnocks Teacake umbrella, duly winning the competition.

Thea Thomas was also there, and ran the Yellow course.

Full results, Routegadget, and further details about the event are available on the CompassSport Cup Final page of the SYO website. The results include the team scores for both Cup and Trophy. 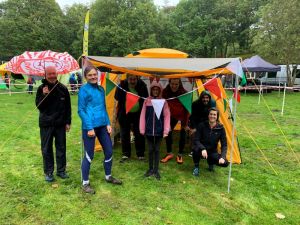 ESOC club tent and most of the team 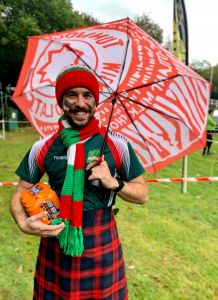 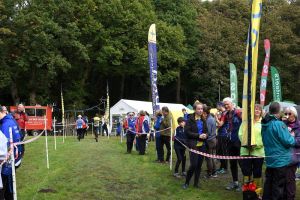 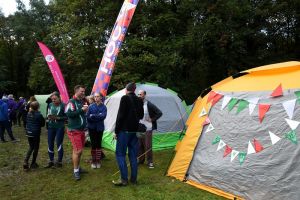