The weekend started with the 6th event in this season’s Fight with the Night series, on Friday 19 January at King’s Buildings. The terrain was described thus: “a complex modern university campus with old and new buildings, courtyards, dead ends, greenhouses, and some grassy areas with bushes and trees. There are steps, slopes and uneven surfaces.” Underfoot it was mostly hard surfaces, with some grassy areas, and the recent cold weather had resulted in very icy patches. The weather was chilly but fine.

This event was complemented by an indoor orienteering race in the James Clerk Maxwell Building, an eight-storey building with a different layout on each floor, all mapped separately, including the many fire doors and staircases. It was like a 3-dimensional maze, and controls were scattered throughout the building, including the roof, which was covered in very slippery ice. Unfortunately, early starters on the Short course found one of the controls missing, but everyone greatly enjoyed themselves anyway.

The Edinburgh City Race took place on Saturday 20 January, and sadly the clear, cold weather overnight meant that many parts of the city centre were like an ice rink. It was announced before the event started that results would be voided, in the interest of competitor safety. Participants were therefore free to go round their courses with no time pressure, and most enjoyed this experience, some taking the opportunity to miss out controls they didn’t fancy, or to stop and chat to curious onlookers.
The assembly area was in George Heriot’s School, on Lauriston Place, with the luxury of warm indoor facilities and a cake stall. The start was a short walk to the southwest, on the edge of the Meadows. The courses were long, and physically challenging, visiting very varied terrain, with many loops, especially on the two longest courses, which had a map turnover. Junior courses stayed in the area around the Quartermile and George Square. Senior courses headed through the modern buildings of the Quartermile development, and the university buildings around George Square, then toured the Southside, led down into the complex multi-level Dumbiedykes housing, and up and down the narrow closes along the Royal Mile, with icy steps, cobbles and paving to contend with all the way. The senior courses finished through Greyfriars Churchyard and back into the grounds of Heriot’s School.
The weather was sunny and bright, with blues skies all day.

A few ESOC members went to the ceilidh on Saturday evening, which was very busy, as usual.

On Sunday 21 January, the first South of Scotland Orienteering League (SoSOL) event of 2018 was held in Holyrood Park. The assembly area was on the grass below Salisbury Crags, near Pollock Halls, and the start was on the grassy slopes at the back of Salisbury Crags. Courses started with a few controls in the complex area N of the start, then most had a long leg to Dunsapie Hill, and zig-zagged about on Whinny Hill before returning to the southern part of the area and the finish. Brown and Blue had a few controls on Crow Hill too. Underfoot conditions were treacherous; very icy on most paths, with hard-packed snow in many places too. The weather was cold, but not too windy, and there was a heavy snow shower for the later starters.

Full results and Routegadget for the weekend’s events are available on the Edinburgh Big Weekend 2018 Results page. More details about the weekend are on the EUOC website.

The events on Saturday and Sunday were the first and second events in the 2018 UK Orienteering League, but as Saturday's race was voided, scores have only been calculated for Sunday's event. There are more details about the UKOL on the UK Orienteering League page of the British Orienteering website. As well as the Individual competition, there is a club league - the score for each club is calculated automatically from the 15 best club members' scores (across various age class groups). ESOC is currently leading the club league, but this is likely to change after the next UKOL events take place, when other clubs will gain more scorers and the scorers themselves will gain more points. 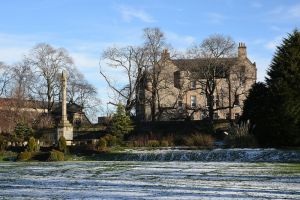 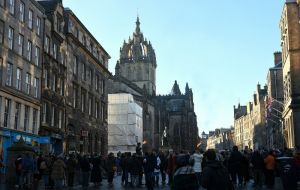 Crowds in the Royal Mile 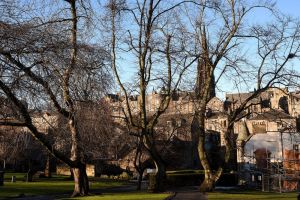 Greyfriars Churchyard - spot the control on a tree! 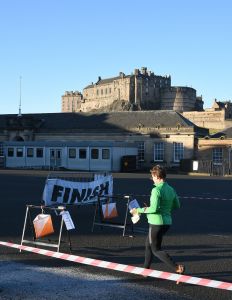 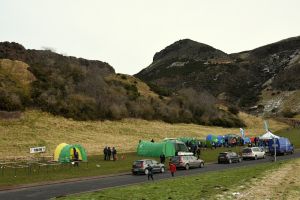 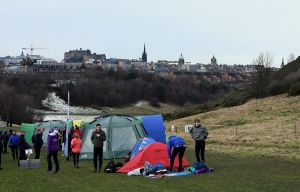 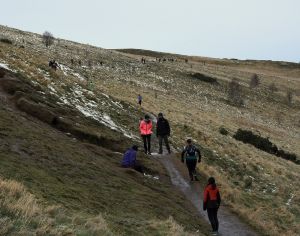 The route to the start on Sunday 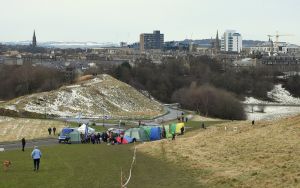 The run-in to the SoSOL finish