As is now traditional, the first event of the weekend was Fight with the Night (the 6th of this season’s series), on Friday 25 January at Calton Hill. The assembly area was in Holyrood Park, near St Margaret’s Loch, and the junior start was nearby, with the junior course entirely in the park. The senior start was 1km to the W, in Regent Road, and the courses looped around Calton Hill, with some controls on the Long course in the busy urban area to the NW, before returning via Abbeyhill to Holyrood Park.

The Edinburgh City Race was on Saturday 26 January, and due to the WOC 2022 embargo, was west of the city centre. The assembly area was at The Dean church, with good indoor facilities including a café, and the start was outside the Scottish National Gallery of Modern Art (Modern One). The junior courses set off westwards, down to the Water of Leith and along the river to the Dean Village, while the senior courses immediately ran into the Dean Village for a few controls. Courses 1 to 4 then headed through the West End to the complicated multi-level area around The Exchange. The longest courses went still further, to Lochrin Basin and the Dalry Colonies. All then zig-zagged around the Dean Village, before an uphill finish at the entrance to the Dean cemetery.
The weather was mostly fine, with light showers, and it was quite mild.

There was a lively ceilidh as usual on the Saturday evening, in a new venue, Greyfriars Charteris Centre, in The Pleasance, and the prizegiving for Saturday’s race took place there.

On Sunday 27 January, the first South of Scotland Orienteering League (SoSOL) event of 2019 took place in Holyrood Park. The assembly area was on the grass beside Holyrood Palace, and there were two starts. The junior start was 1km away, around the bottom of the hill to the E, and the junior courses led back around the hill to the finish below Haggis Knowe. The senior start was also 1km away, but uphill, on the col at the S side of Whinny Hill. Senior courses went up, down and around Whinny Hill, with a few controls in Meadowfield Park, and then a long leg across to the slope behind Salisbury Crags, where there were a few controls in the complex contours above Holyrood Palace, before heading down to the finish.
It was a fine day with some sun, but cold and very windy higher up. The underfoot conditions were quite good, with surprisingly little mud.

Full results for the weekend’s events, including Routegadget and other analysis, are available on the Edinburgh Big Weekend 2019 Results page. More details about the weekend are on the EUOC website. 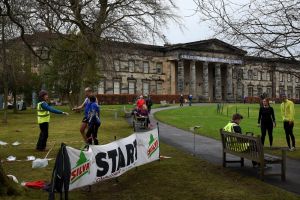 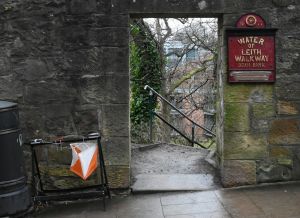 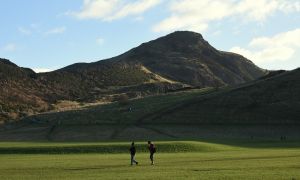 Arthur's Seat (Senior start was at the col on the left) 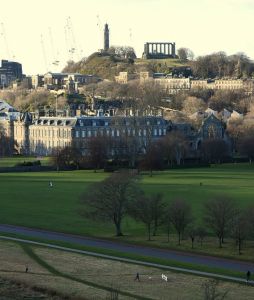