The weekend’s events started with Fight With The Night (the 6th of this season’s series), on Friday 24 January at Calton Hill. The assembly area was in Holyrood Park, near St Margaret’s Loch, and the junior course was entirely in the park. The senior start was 1km away in Regent Road Park. There was a timed-out road crossing and map exchange on both senior courses, and the Long had a map exchange too.

The Edinburgh City Race took place on Saturday 25 January, with the assembly area in Pollock Halls of Residence. The start for shorter courses was nearby, and the far start was at the east end of The Meadows. Senior courses had some long legs through Mayfield and the Grange, with shorter legs in Astley Ainslie and Pollock Halls, and most courses were quite long.
The weather was cool and dull, but stayed dry.

The traditional ceilidh on Saturday evening was in the Southside Community Centre, in Nicholosn Street, and was well-attended as usual. The City Race prizegiving took place there, as well as a raffle.

On Sunday 26 January, the first South of Scotland Orienteering League (SoSOL) event of 2020 was held in Holyrood Park. The assembly area was on the grass below Salisbury Crags, near Pollock Halls, and the start was at the southern end of Hunter’s Bog. In this very hilly area, most courses had a lot of climb. Senior courses started with a few controls at the back of Salisbury Crags, then a long leg to the eastern side of the hill, where Blue and Brown had some controls in Meadowfield Park (which was muddy), and there was a gaffled section on Whinny Hill, followed by another long leg to the back of Salisbury Crags, and eventually a downhill finish.
The weather was mixed, with heavy rain for a while, which eased later, and it was quite windy on top of the hill.

Full results and Routegadget for the weekend’s events are available on the Edinburgh Big Weekend 2020 Results page. More details about the weekend are on the EUOC website. 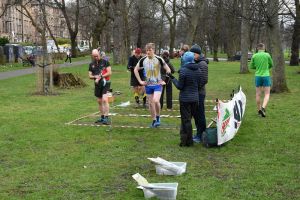 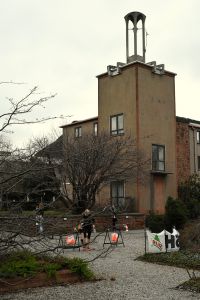 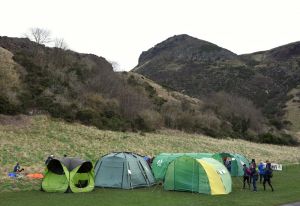 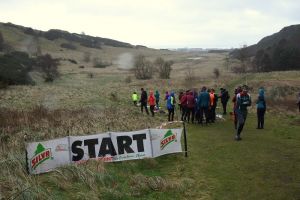 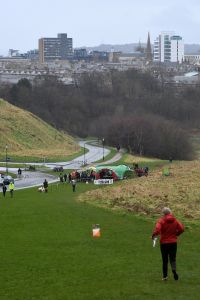