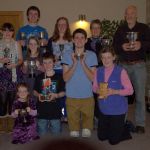 The 2012 Club Championships were held in conjunction with the East of Scotland Championships and SoSOL event at Dalguise, near Dunkeld, organised by TAY.  This is a rough and steep, physically challenging area, and times were longer than might be expected. Some tricky calculations then took place to decide the ESOC Club Championships winners. See this news item for a report from the event.

Later in the day, there was a superb turnout at Swanston Golf Club for the social and prizegiving.  50 ESOC members enjoyed the buffet and convivial atmosphere, and then Crawford Lindsay (Club Captain) presented the trophies.

The last trophy had no obvious winner this year, so the BOF ranking list was brought in to determine the ESOC member with the greatest percentage increase in their ranking score over the last year. Katy was the clear winner using this criterion. 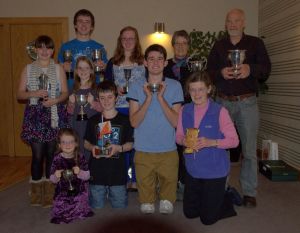