ESOC Juniors at the 2019 JIRCs

Three ESOC Juniors, Ben Brown M18, Rachel Brown W16 and Maja Robertson W14, were selected to be part of the Scottish team to compete at the Junior Inter Regional Championships (JIRCs) in South Yorkshire last weekend. This is a junior event where teams from the 12 British orienteering regions compete against each other in a weekend of racing with individual competitions on the Saturday and relays on the Sunday. The juniors all stay together overnight. The overnight stay is often on hall floors but this year they all had the luxury of beds at the Kingswood Activity Centre outside Doncaster.

The Scottish team all set off by minibus on the Friday for the journey south, one minibus scooping up all the juniors from the North and the other leaving from Glasgow with all the south juniors (including Ben, Rachel and Maja).  The journey South was enlivened by watching the live results from the Junior European Cup in France and celebrating the Gold for Megan Keith from INVOC and Silver for Grace Molloy from FVO -  some inspiration and motivation for the weekend ahead.

After a night’s sleep and a hearty breakfast it was time to head off to Cowms Rocks for the individual races. This was a new area for orienteering beside Snake Pass. Although they had awoken to a dry day, the clouds gathered and the rain had started by the time they arrived at the assembly area. The rain varied in intensity for most of the day from torrential to merely heavy and the open hillside for most of the course provided little shelter and the areas of marshland just got wetter. The final part of the courses was in runnable woodland.  As a result of the rain and muddy descents many, including Rachel, also had difficulty being able to read their maps by the end of their course. It was a very successful day for the Scots and Rachel won the W16 class, Maja was 10th in W14 and Ben was 18th  in M18.

It was then back to the Activity Centre for warm showers and to make full use of the drying rooms. In the evening there was a prizegiving. As well as medals for the individuals there were also team points which are calculated for each region based on the top two finishers in each of the age categories. Scotland was victorious with 261 points, North West region  and Yorkshire and Humberside were 2nd equal with 231 points. There was then time for a ceilidh for those who still had energy after a gruelling day.

After hopes that the weather might be better for the Sunday – it was again a very wet day as everyone set off for the relays at Tankersley. There are 2 relay races, a boys which has M16, followed by M14 and finally M18 on the last leg and a girls with the same age order. Again the top 2 teams from each region score points depending on their position. The Scots approached the event like a battle with Braveheart face paint to terrify the competition. The girls set off first with Rachel back 1st with a 2 minute lead over the others. However, the conditions and complex area meant there were a lot of mistakes and her team finished 2nd overall with the 2nd Scottish team finishing in 4th. Maja’s team finished 4th (2nd  Scottish team). The boys also had a number of mistakes but managed to get one team home in 2nd place, but their 2nd  placed team had misspunched. The Scots watched nervously for their other 2 teams as an overall win in the relay depended on their finishing position. There were celebrations all round as Ben came into view bringing home the 2nd counting Scottish team in 12 place. The Scots had done the double and taken the overall win in both the individuals and the relays – as well as the overall trophy.

By this stage everyone was wet, muddy and cold as they shivered through the prize giving in the rain, but a happy team set off for the long journey home. However, the journey home was not without incident as the South minibus broke down just south of Lockerbie. Luckily David Robertson and Judy Bell had been waiting at Abington to pick up all the Edinburgh based juniors to save them from having a longer journey home via Glasgow. They were able to come to the rescue fitting in all the juniors and bringing them home – leaving the poor drivers Steve and Rachel Wilson from Clyde to sort out getting the minibus back to Glasgow.

A great, but very wet weekend.  Thanks to all from South Yorkshire Orienteers and all the volunteers for a heroic job in truly awful weather conditions.

Photos from the weekend from Wendy Carlyle are here.

Full Results of the Individual and Relay results on the South Yorkshire Orienteers webpage here.

Photos below were taken by Sarah Dunn. 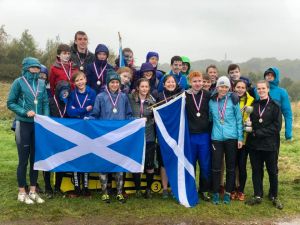 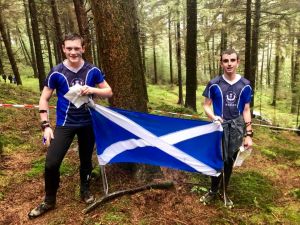