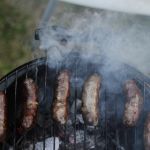 Kirsteen Kershaw reports on the Club Barbecue held on the 'rest' day during the Scottish 6 Days.

"Unfortunately the Rain Gods had, in their inevitable way, heard a whisper that Gillian and Jim Martin had invited the club round for a barbeque at their house in Perth on the Wednesday evening during the Scottish 6 Days and had decided to add their own wet touch to the proceedings. They were however reasonably considerate and did not make it so wet as to completely spoil the evening. Jim had taken up residence at the top of the garden, under an awning, and acted as the chief chef for the evening cooking numerous burgers, sausages and other such delicacies. He even had his meat thermometer to hand so that that was no chance of any of us being able to use food poisoning as an excuse not to run the next day.

Meanwhile most of the guests stayed safely indoors apart from an occasional foray outside to keep Jim company and provide him with a supply of food to cook. The chairs around the garden did seem rather lonely sitting forgotten outside in the rain, but no one seemed to want to join them on a damp evening. Inside a huge supply of rolls seemed to disappear along with crisps, salad, pickles and relishes. Several people had committed themselves to taking part in the famous 6-days quiz and had to leave early. Some of them may have had to miss out on the wonderful array of sweets which were provided later. As usual these were demolished in record time despite all of the burgers etc already consumed and I am not sure that the relatively short runs earlier in the day round MacRosty Park justified the number of calories that were then consumed. The Key Lime Pie was fantastic – recipe please Gillian!

The youngest ESOC members disappeared into the front room and seemed to be having great fun there entertained by their young host Robbie. The older ones discussed their courses from the previous few days, compared their injuries and chatted happily. Altogether it was a great evening and a lovely get-together of old and new club members. Many thanks to Anne and Fran for organising it and to Jim, Gillian and Robbie for the invitation to their home and for being such great hosts."

PHOTO: The attached photo was not taken at the BBQ; everybody was so busy talking about the weather, talking about their runs, and eating the wonderful food that nobody seemed to be taking photos. 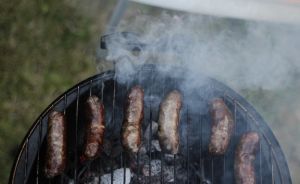