For those who haven’t come across it yet, Turf is a location-based mobile game, played on a smartphone after downloading an app. For more information, see the Turf website, or articles in the last two issues of Capital-O. The aim is to collect points by going to virtual zones – you get points for taking them, and more points for keeping them. There are zones all over Edinburgh now, so it’s a bit like a massive score event in MapRun, with an infinite set of controls. Each month is a new round in Turf, when all zones are reset, and ESOC ran a small competition at the start of the September round, to see who could gather the most points between 11am and midnight on Sunday 6th.

Competitors adopted various strategies. Some headed out before 11, so they could be poised for action, only to find that the reset was quite slow this time and it took a few minutes before some zones were available. Then the game started in earnest. Most players were scattered around Edinburgh itself; TimmyM steadily mopped up all the zones in Livingston before turning his attention to Balerno; ESOCWoody started turfing in South Queensferry and cycled into town for a long session totalling 96km; in East Lothian, Calumbo2000 covered 53km; Hodge worked his way round Penicuik.

Several people had other commitments, so could only spend a short time on the game.  The longest session, and highest score, came from féarglas, and saw her overtake ESOCWoody at around 11:30pm. ESOCWalter went out to take a couple of final zones just before midnight, overtaking ESOCJanet and ESOCJeneral at the last minute! The prizes (being able to nominate a new zone wherever they wish) finally went to ESOCWoody and ESOCLadyP.

There was much chat on the ESOC Turfers WhatsApp group throughout the day, with encouragement and celebration as many people gained medals. Some realised that low tide at Portobello was conveniently mid-morning – and even better, it was a particularly low tide, so it was possible to easily access a zone that’s intended for swimming, and gain the “Order of Aquamen” medal. Several reached milestones such as Take-500 (for having carried out 500 takes), Restless (for taking a zone every hour for 12 hours), Staminator (for taking 100 zones in 24 hours) or 250 Unique (for having taken 250 different  zones).

Needless to say, everyone was stealing zones from one another as the day progressed, and many zones were taken repeatedly as the map gradually turned from yellow to red. There was a big inter-region turf competition in Sweden, and apparently yesterday set a new record for takes in one day globally. Most people encountered another turfer at some point during the day, reaching zones only to find that they’d already been taken, or cooperating and earning points for an “assist”, where both are in in the zone at once.

The turf map of Edinburgh was busy (see image below). Everyone seemed to have fun, and several remarked how much they’d enjoyed visiting new places they didn’t know about before. There’s always something new to find in Turf! 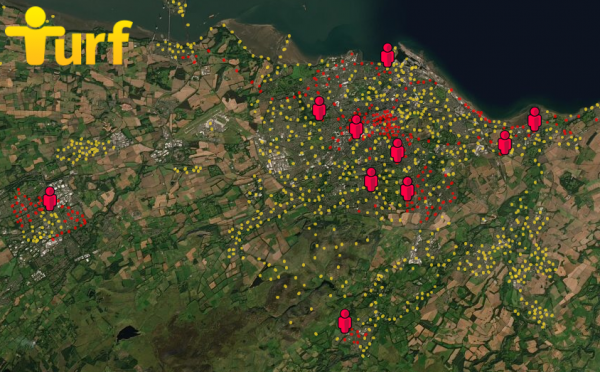