After horrible weather on the previous two days, Sunday 6th dawned fair, and by 11am most of the ESOC turfers were ready and waiting for the start of the new round. But there was a problem with the Turf servers, and at first there were big delays – it was hard to tell if takes were registering, or even to see the zones at all. Some very strange things were happening, and there was much desperate restarting of phones. Eventually it settled down and the turf map was busy, with many of the turfmen on the app sporting santa hats (available to Turf Supporters during December). 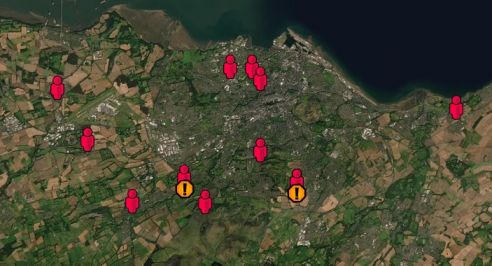 Lots of turfers, and even a couple of takeovers - but no zones visible!

The Turf website explains: “Today, during the start of the new round, we know that a lot of you experienced some bad performance. This was due to a new server-setup which aims to increase performance. However a bug in the new setup had unfortunately slipped in. We worked hard to find the bug and hope that you noticed the fix. Round starts are tough on our servers and hard to simulate in a test-environment. A Swedish fika is always a good backup plan on sundays.”

Kingslayer commented: “Today's round start was exactly as it was in the early years - chaotic, partially non-functioning and extremely laggy (CSL might remember). The last 4-5 years it has been working reasonably well, some hiccups only the first 10 minutes or so and sometimes not even that. But the last few rounds (since you started turfing!) it has gradually become more laggy again. The development guys did some changes to the servers before this roundstart in order to get better performance, but as you noticed the effect was quite the opposite. But they have collected enough data in order to (hopefully) get a much better round start in January.
Round starts to put some strain on the servers. First all zones need to be updated and set to neutral. And then there are normally a lot of turfers standing by to make the first take. Usually more than the other days during a turf round. And they all make their first take at the exact same time which means the server is flooded with takeover messages from all clients at once. For the server it's like a hacker attack! This is an abnormal situation which lasts for the first 1-3 takes everyone makes, then gradually takes will be distributed over time so they don't happen at the exact same time which is the "normal" state and which the servers (normally) can handle. Unfortunately we can't test a round start, any changes need to be made for a real live roundstart and tested live. I know this collides with your monthly turf challenge and I'm sorry you had to experience this piece of notalgia today. I really hope the next round start will go smoother.”
(Incidentally, CSL doesn’t remember, because in those days, he was usually orienteering at 11am on Sundays!)

Once things got going, the usual suspects were busy as usual, along with a few new ESOC turfers, and the map gradually turned from yellow to red. Much of the action was in the north and west of the city, with many zones in the east remaining yellow. The most taken zone was AdamCathZone, which changed hands 11 times! 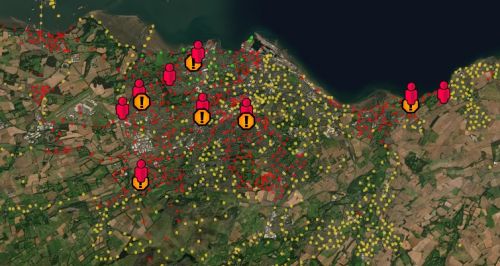 Lots of action during the afternoon

ESOCWoody achieved the highest score, taking 235 zones altogether, which made him 1st in the world at the finish of the ESOC competition at 10pm, proudly wearing the yellow jersey. He was still first in the world at the end of the day. Since ESOCWoody has already been awarded a prize zone (TheWoodyBoat, in September), he wasn’t eligible for one this time. The ESOC senior prizewinners were TimmyM and ESOC-HR, with Calumbo2000 taking the junior prize at 3pm. They’ll all be able to nominate a new zone location.

As well as the turfing competition, there were spot prizes for the lucky people who found a laminated ESOC turf symbol at one of the zones they visited. There were 5 of these altogether, and they can be exchanged for an ESOC woolly hat from the ESOC Christmas merchandise range. At the time of writing, 2 hadn't yet been claimed!

There was discussion on the ESOC Turfers WhatsApp group throughout the day, and some good photos. Hope everyone enjoyed themselves. We’re thinking of having a new format for the start of the next round – look out for details in a few weeks’ time! 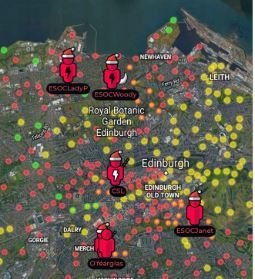 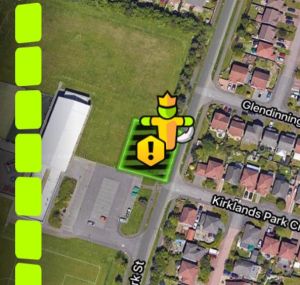