This was an extended Turf Challenge, to allow everyone time for other activities, not least ESOC’s traditional “Hair of the Dog” new year social. The Turf contest ran from 11am on 2 January (the start of the new Turf round) until 11am on 9 January.

The aim (remarkably similar to the ELO Festive Frolic, but decided before that event!) was to take zones whose initial letters spell festive or seasonal words, e.g.
BELL - Buchanan, EasterBridge, Lochrose, Linkszone
SNOWY - SingleCask, NCR754, OverApproach, WatsonsZone, YouAnimal
The zones for each word had to be in the right order, with no other zones in between, and a word could only count once per day. Scoring was one point per letter in each complete word, plus a bonus point for every word.
Competitors adopted various strategies, and some were hampered by a lack of suitable letters, especially vowels. Most said the spelling challenge was fun, while others didn’t like the idea of passing zones without taking them. There were some ambitious words, including FRANKINCENSE, MYRRH, CHRISTMAS, SNOWSTORM and CRACKER, plus plenty of shorter words – the most popular were TREE, ELF, GOLD and HAT.

As usual, the ESOC Turfers WhatsApp group had plenty of interesting chat as participants reported their progress. Hope everyone enjoyed themselves! 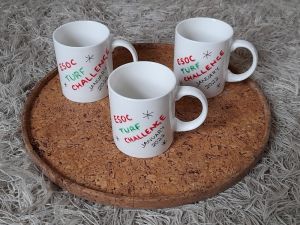 prizes for the winners