For anyone who hasn’t yet tried Turf, see the articles here for more information about this diverting activity.

After Saturday’s very wet weather, many were a bit downbeat about our chances on Sunday, but in fact it was a fine day, with light easterly winds and a fair bit of sunshine, much warmer than expected. Good turfing weather!

There was great anticipation as the 11 o’clock countdown arrived and the map turned yellow. Once again, competitors adopted various strategies and many had several sessions as the day went on. Some zones changed hands repeatedly – four of them were taken 7 times! These were LorettoXing and EsksideBridge (neighbouring bridges in Musselburgh), and another pair of zones, HaymarketRail and PairkieZone (in the West End of Edinburgh). Plenty of stealing and re-taking of turf zones went on all day, and it made entertaining viewing for those watching on the website or app. There was a good haul of medals, some quite unexpected, including various Greed medals (for holding many zones at once), Take medals (for having taken lots of zones overall), and Neutraliser (for taking 20 neutral zones within 5 hours). The ESOC Turfers WhatsApp group was busy with comments, photos and congratulations.

The prizes (being able to nominate a new zone wherever they wish) this time went to ZulaTheAlien:) and MarkkuEsoc. Mark’s sterling effort saw him gain more points than anyone else in the whole world! Féarglas wasn’t far behind, and after a lot of determination, had been 5th in the world at the end of the September round, an astonishing result.

Here’s Mark’s story:
“Phew - what a day! Strategy wise I knew that it would take an enormous effort to get anywhere near Leonne with her Turf track record, never mind any other ESOC members as well, so I was tooled up with some bike spares, food, drink, clothes and phone re-chargers for a potential stint till darkness when I could then pick up lights if needed. I’d decided to hit the highly concentrated zones in the centre of town from the off to try and become RegionLord so that my takeover time was 5 seconds quicker, with a loose mission to end up down Musselburgh way, where there are lots of close, flat zones and where Jeni and the children would go for an afternoon out. I gained RegionLord after 3 zones, Hogwarts, Greyfriars and HarryPotter, though my GPS seemed slightly out so it was a bit of a slow start, but otherwise fine. 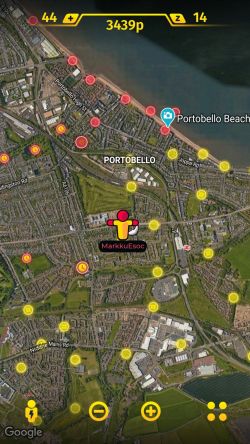 I then raided the Newington, Meadows, Bruntsfield, Harrison Park, Haymarket, Royal Mile, Abbeyhill areas – around here a message flashed up to say I was 4th in the world which shocked me, but I didn’t stop to read anything. I suffered what felt like a big loss of time around Abbeyhill with a new build going in meaning a straight line cut-through no longer exists, when aiming for Hibernian FC zone from MorayPark. My ride then took me on to Portobello, Joppa and Fisherrow.

I went 1st in the world in Figgate Park when suddenly my wee man went gold, I couldn’t believe it and never thought it would even be possible, but it did spur me on to go faster.

I hadn’t been tracking positions and the first 3 hours had simply been a case of get your head down and go. My most surreal moment was being delayed by 2 giant cuddly Paw Patrol (very popular children’s TV programme, for those not in the know) characters who were lined up in a very tight alleyway waiting to surprise a birthday child in their back garden! No pic though – sorry! Riding around the back of Musselburgh racecourse was new to me, and boy were the tracks rough and wet, puddles coming almost as high as the bottom crank in a number of places, and the zones are widely spaced, however I do enjoy exploring new places.

Through Musselburgh I slipped back to 2nd in the world but then turfnick Nybegynner seemed to call it a day, so I regained top spot (and kept it overnight). I then continued through Prestonpans, Port Seton and Cockenzie.

I must mention the tremendous support from the family who came out to meet me down in Musselburgh and were on-call in case of mechanical disaster, with Jeni supporting me at the expense of her own chances.  Eventually my luck did run out in Cockenzie at 6pm after 179 zone takes, when I got the deflating feeling in the back tyre. We loaded up, headed for home, Jeni went for a local ride ending with a rear puncture, so we fixed it. I did a further 14 local to home zones in the dark before another rear puncture, came home and swapped onto my son’s bike for a final local fling of 9 zones, by which time I’d gained sufficient points to be confident of not being overtaken come midnight. Our shared bike is now having a date with the bike shop with better puncture resistant tyres high on the agenda!!

All in all I took 202 zones which culminated in getting the El Staminatore medal, for gaining 200 zones in 24 hours, though again it was a complete surprise when it popped up. I did around 9 hours of riding and gained about 45,000 points. Unfortunately I can’t tell the total distance covered as I don’t track that. Big thanks to Crawford and Sally for once again running the competition!”


The images below show the turf map of Edinburgh at different stages of the day, and a screenshot of part of the Turf homescreen featuring several ESOC turfers. Good luck to everyone for the rest of the October round, and thanks for participating! 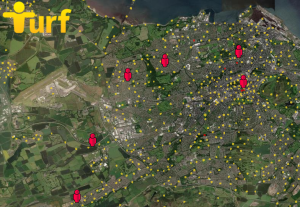 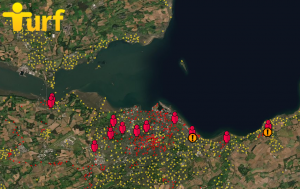 Edinburgh at 2:40pm - getting busy 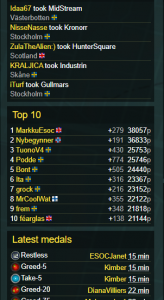