The Glasgow Parks Championships is an annual competition, with three separate short events in one day. It’s good fun and always eagerly anticipated. This year, start times were allocated in advance for all three venues (in the past, the third race has had a chasing start).

The first race was at Glasgow Green, southeast of the city centre. The terrain here is mostly flat, open parkland, giving easy navigation. Longer courses crossed the Clyde for a few controls in Gorbals North.
The second race was at Alexandra Park, not far away, to the east of the city centre. Parking was north of the M8, crossing by a footbridge to reach the park. Alexandra Park is on a hill, with a disused golf course providing fast, open running.The final race was further east yet, at Drumpellier Country Park, near Coatbridge. This area is rougher, with terrain including dense scrub, mixed woodland and lowland heath, criss-crossed by paths and tracks. Unfortunately two of the controls were the wrong way round, which affected several courses, so a lot of people were initially shown as having mispunched although they had been in the right place. They were reinstated.
The weather was fine and sunny all day, with no wind, though it was cold. Underfoot conditions at the first two races were generally quite good, with a few icy patches on paths; it was a bit wetter underfoot for race 3. 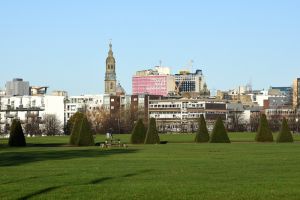 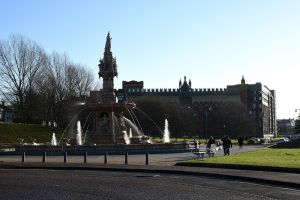 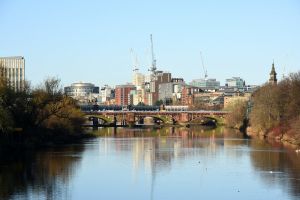