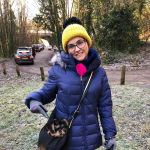 January 2nd was my first outing with my new club ESOC after moving down from Aberdeen at the end of last year.  Big thanks to everyone who gave up their time to put on the run and the social afterwards.  It was a lovely crisp winter’s morning, just right for a gentle trot around Colinton Dell after all the festivities and over-eating of the previous week or so.  There was a choice between an urban or a forest run (or both), both score courses with a time limit of 30 minutes and some bonus points if controls were picked up in numerical order.  As always at score events I over-estimated my capabilities and was overdue at the finish by several minutes but the bonus points helped to cancel that out.

The orienteering was followed by the Hair of the Dog social in a nice warm scout hut - plenty of chat, a great spread of food and some fun games and quizzes for all ages.  Somebody signed me up for the teddy bear races but unfortunately (?) we had to leave before that got started.  Ah well, next year...

I’m looking forward to being part of a big and active club. Many thanks to everyone for making me and Rob so welcome (even though he’s joined BASOC as his new club).  One of my objectives for the year is to improve my performance by getting fitter.  Ladies Monday night running beckons...

Photo Note: The photo is of Hazel with the hairy dog which just might have provided the "Hair of the Dog" 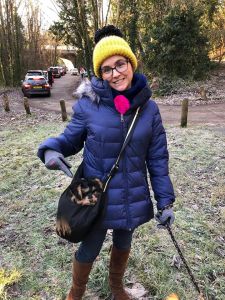