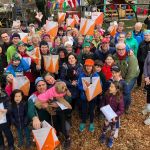 Our “Hair of the Dog” social was, as usual, a total extravaganza of orienteering fun and games on 2 January! This year we were based in Bridgend Farmhouse near Cameron Toll, and running at Craigmillar Castle Park.  In a format that has been used before, the controls were not put out in advance, and the runners placed one control each, got as many as they could of the other controls, and then collected back their control before finishing. This of course raises the risk of controls being placed wrongly/badly, but this was not an issue thanks to the skills of the ESOC gang who attended. It’s also a great format if you’re the planner and don’t want to put out the controls and collect them in yourself, as one cheeky heckler at the pre-event briefing pointed out!

Thankfully we got the run completed before the rain came on, which I was worried about when looking at the forecast in the days before. We had a variety of games, some old favourites and some new, ranging from the written puzzles (I think the portaloo disaster logic challenge was definitely the most popular!) and more active games such as the hat game. Then of course as the final thrill came the main fixture in the whole of the ESOC event calendar, the teddy bear races!  I was over the moon of course that my wife Hazel and daughter Zoe were the senior and junior champions this year, and it just shows what a dedicated programme of training with cardboard tubes can do over the festive season!

One of the elements of the run was to get bonus points for coming up with an orienteering themed song, and the winners of the bonus points were as follows:

“I’m so excited!” by The Pointer Sisters, with a focus on the line, “I’m about to lose control and I think I like it!” – Martin Caldwell
“I’m dreaming of a white control card”, showing that the “o” link could be very tenuous – Katy Lessells
“I would walk 500 miles” by the Proclaimers, which would be an unsuccessful run by anybody’s standards – Jasmine Muir
“Everybody wants to rule the world” by OrienTears for Fears – Moir family
“Let’s go fly an orienteering kite”, which although it misrepresents entirely what o-kites are for, was still awarded some points – Helena Nolan

If you think that these suggestions are ropey, you should have seen all the other ones! Lots of great ideas though and the points for the songs, as well as catching the festive elephant, definitely shook up the final leader board on the results.  The winners were crowned as follows and rewarded with one chocolate brussel sprout each in most cases:

Thanks to everyone who came along and I wish you all a fantastic 2020! 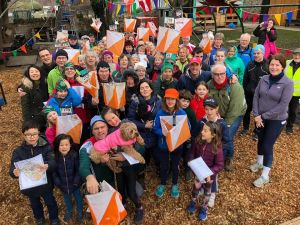