There was general agreement that this year’s JK was an excellent weekend, with comments from many competitors mentioning good planning, accurate maps, great arena and parking arrangements and glorious weather. Unfortunately there were major problems with the results, which took several days to fix, but the results have now been finalised. There were some impressive ESOC runs on all 4 days.

The JK Sprint was on Friday 19 April (Day 1) at Aldershot Garrison, Hampshire. The area has a mixture of new and old buildings, some of which are very similar to one another, set in varied parkland with many trees, hedges, gardens and structures such as bicycle sheds and fire escapes. It is mainly flat, with one steep slope in a wooded area.

The JK Individual competition consists of 2 days (Days 2 and 3), and the times are added together for the overall results.
Day 2, on Saturday 20 April, was a Middle Distance race at Windmill Hill, which is in Surrey, east of Farnborough. Much of the area is closed to the public as it’s an army training area, surrounded by a big fence. The terrain is mainly wooded and steeply undulating, with numerous paths. The Basingstoke Canal and a railway line run across the southern part of the area, but only the very longest courses had controls on the other side.
Day 3, on Easter Sunday, was at Cold Ash, near Newbury, in Berkshire. This is mixed deciduous and coniferous woodland, with several gently sloping hills and a fairly extensive path network. The longest courses crossed into the western part of Bucklebury Common, which has some areas of thicker forest.

On Easter Monday (Day 4), the JK Relays were held at Minley, NW of Farnborough. This area has varied terrain on a series of low ridges, with mature deciduous woodland, small areas of conifer plantation and open areas, and a network of tracks and paths.
ESOC had 3 teams, in classes B, G and J.
There was a podium place for ESOC Samson (Laura Robertson, Rona Lindsay, Sarah Jones) who came 3rd out of 21 teams in the Women’s Trophy class.
ESOC Laidlaw (Roger Scrutton, Ian Pyrah, Richard Purkis) came 42nd out of 61 teams in the Veteran Men (M165+) class.
ESOC McBeath (Janice Nisbet, Margaret Dalgleish, Les Dalgleish) came 18th out of 31 teams in the Ultraveterans class (M/W210+)

Details about the weekend, along with links to photos, can be found on the JK2019 website.

Next year, the JK will be in the North East of England, from 10 to 13 April 2020, with events at Stockton-on-Tees and the North York Moors. The JK2020 website gives advance information. 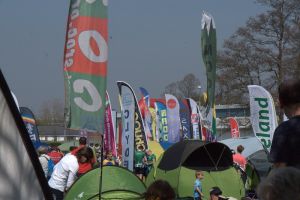 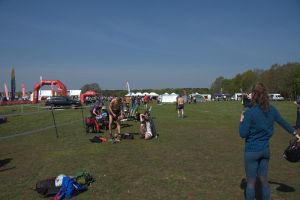