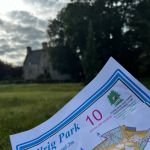 The orienteering was a 60-minute Score event from 7pm to 8pm; the Turf event (ESOC FTT#4) took place at the same time, in a similar area; the refreshments afterwards were at the Bonnington Bar.

Janet Clark reports:
“These dual-purpose socials are great fun! Everyone is on foot - no bikes - and everyone is looking for control points. These can be Turf zones on your phone, if that floats your boat, or they can be control sites marked on a paper map if you want a bit of orienteering. Tonight we used three of our newly-mapped areas, Pilrig Park, Lochend Park and Victoria Park.
Leonne Hutchinson planned Turf zones all with names from Pokémon, which appealed to the kids. Walter Clark planned a Score challenge using all three parks with more points for the furthest away controls.
It was the taking part that counted, not the Results. Walter won the Turf contest; Vicente Lopez Sanchez won the orienteering (he visited all the controls in all three parks, and also got one of the two bonus 50-pointers. Good going for his first run since completing the Edinburgh Marathon.)
But everyone was a  winner! Those who adjourned to the nearby Bonnington Bar were presented with their prizes. These were packets of crisps or Mars bars, attached to ribbons and ceremoniously placed around the winners' necks. There was  a special prize for Callista as a welcome to ESOC, doing her first event.”

The Turf event map and full results are available on the ESOC FTT#4 Event page on the Turf website.
Details of how a Turf event works are in this document: Participating in a Turf Event

Thanks to Leonne and Walter for organising the evening. 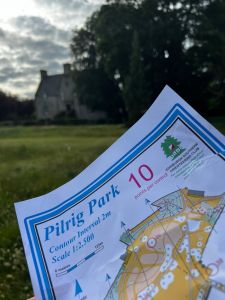 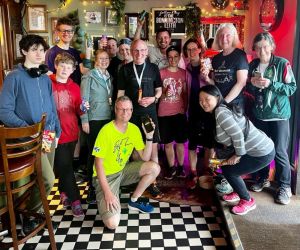 Orienteers and turfers at the June social