Due to Covid restrictions, the 6-Days was in doubt until mid-July, and eventually was split into two 3-day events to reduce numbers attending on any one day. Competitors who had entered all 6 days were allocated 3 days out of 6 - Group A on Days 1, 2 and 5; Group B on Days 3, 4 and 6. ESOC’s organising day was Day 6, so most ESOC members competed in Group B. Some were in Group A, if they were travelling with people from other clubs who were in that group. Another complication was that Day 5 was a World Ranking Event, so M/W21E competitors ran that day instead of Day 4.
The weather was mixed but generally good, there were fewer midges than feared, and the scenery was beautiful, with some wonderful views. Although there were no rest day activities or programme of social events this year, there was plenty to do in the surrounding area, including many different walks, boat trips and rides on the West Highland Line.

Day 1: Ardchattan, Sunday 1 August
Ardchattan is on the north shore of Loch Etive, near Connel Bridge, north of Oban. It’s a large area, mainly hillside with panoramic views over the loch. The terrain includes open moorland and marshes, with many rock features, and vegetation is tussock and bog myrtle, bracken on the lower slopes, and some patches of gorse. There are trees along the streams, some of which are in deep gorges. The weather was fine and sunny.
Just a few ESOC members competed – the most notable result came from Mary Williams, who won W70L.

Day 2: Inverlochy, Monday 2 August
A new area, Inverlochy includes the golf course on the northern edge of Fort William, up onto the lower slopes of the Nevis range. The terrain is very mixed, including open fairways on the golf course, birch scrub and areas of marsh, oak woodland on the steeper slopes, and extensive bracken on open areas.
This was a Middle Distance event, and again just a few ESOC members competed.

Day 3: Arisaig, Tuesday 3 August
Arisaig is on the Road to the Isles (west of Fort William) where there is great coastal scenery with beautiful sandy beaches. Some had orienteered here before at a Purple Thistle event. The terrain is open moorland, mostly grassy, with some bracken in places. There are a lot of complex contours, plenty of rock features, marshes, streams and small lochans, and glorious views. Some courses had a very long first leg. Most ESOC members competed on this day, and there were wins for Rachel Brown in W18L and Alison Cunningham in W55L.
Some ESOC members enjoyed a social on the beach at Arisaig afterwards, though parking was difficult.

Day 4: Creag Dhubh, Thursday 5 August
Originally, Day 4 was planned to be at Achnacarry, NE of Fort William along the Great Glen, but various circumstances led to it being moved to Creag Dhubh, the Day 5 area.
Creag Dhubh is further east, near Newtonmore, and is a new area for orienteering. The map covers open birch woodland on the SE side of the hill, and the longer courses continued over the top of the hill onto the open moorland on the NW slopes. The terrain includes steep hillsides, boulder fields, areas of scree and marshes, and was reported as pretty rough, with much bracken hiding the features. The weather was dry but mainly cloudy. Most ESOC members competed on this day.

Day 5: Creag Dhubh, Friday 6 August
This was the same area as Day 4. Day 5 was a World Ranking Event, so M/W21E entrants ran this day, and not Day 4. A few other ESOC members ran Day 5 too. Although there was an extensive network of elephant tracks from the day before, these didn’t necessarily help!
It was quite wet, with heavy showers but luckily not the thunder that was forecast.

Day 6: Creag Meagaidh, Saturday 7 August
Creag Meagaidh is a National Nature Reserve, east of Spean Bridge on the north side of Loch Laggan. The terrain is mainly open grassland and heath, with extensive marshes, boulder fields and lines of crags. It was reported to be rough.
This was a Middle Distance race. Except for the youngest juniors, there was a long walk to the starts, and a remote finish. This was ESOC’s organising day; many people were there early to help and/or stayed late clearing up. The weather was mostly dry, with a couple of heavy showers.

There was no prizegiving this year. In the overall results, scores were calculated using the Scottish 6 Day points system. Points were awarded for each day’s result, based on finishing position (i.e. 1 point for 1st place, 2 points for 2nd place, and so on). A competitor’s best 2 out of 3 results were added up to give their overall score, and with such a limited set of results, there were a lot of ties.

The Scottish 6 Days website gives further details, including description of the competition areas, day reports, video highlights, and full results for each day, including Routegadget.

Day 2 (Inverlochy), Day 3 (Arisaig) and Days 4 and 5 combined (Creag Dhubh) were the 3rd, 4th and 5th events in the 2021 UK Orienteering League. There are more details about the UKOL, including the league tables, on the UK Orienteering League page of the British Orienteering website. ESOC is now lying 22nd in the club league. The score for each club is calculated automatically from the 15 best club members' scores (across various age class groups) - so the club members whose scores are included may change as the year goes on and more events are included.

Arisaig beach - Starts were by the mast in the background

Creag Dhubh - parking and general view of the hill 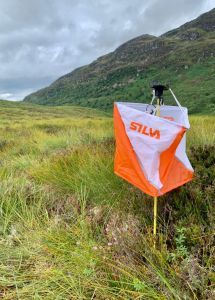 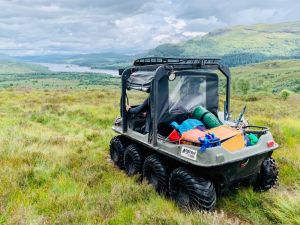