The Urban event on Saturday 23 October was the 4th event in this year’s Scottish Orienteering Urban League. Lossiemouth is on the Moray coast, north of Elgin. Courses started to the west of the town centre, and most had a few controls in a very complex housing estate, with a maze of narrow pathways between the houses offering plenty of route choice, as well as heading uphill into an older area with less interesting route choice, but some great views on the longer courses. The weather was wet early in the day but the rain stopped during the afternoon and eventually there was some sun.

The 4th event in this year’s Scottish Orienteering League was on Sunday 24 October, in Lossie Forest, on the Moray coast just to the east of Lossiemouth. This is a great area of forested dunes featuring contrasting terrain. Near the shore the dunes are very complex and quite steep, enlivened by many extraction lanes, and further inland the terrain is much flatter, with indistinct features. There are paths and tracks throughout the area, and as the ground in the forest was soft and mossy, the paths gave firmer running. The weather was fine, though cloudy, and very mild for the time of year.

Full results, Routegadget and other details are on the Moravian website:
Lossiemouth SOUL
Lossie Forest SOL 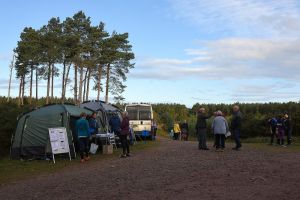 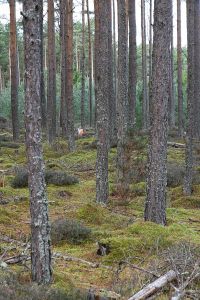 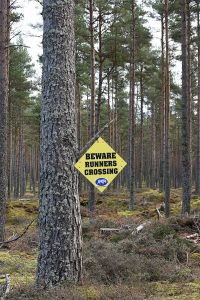 Lossie Forest - route to the start