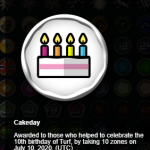 Following on from my article in the previous issue of Capital-O, I thought it would be good to say a bit more about Turf, especially since July 10th was an important anniversary – the 10th birthday of the game. It’s an online game that you play using an app on a smartphone. It’s a bit like MapRun, but you get to choose your course, and it’s infinitely variable. You can see where the turf zones are when you start up the app, and you simply take the zones by going to them. This earns you points, and the aim is to get as many points as possible each month, by taking zones and re-taking them when someone else takes them from you. As in most online games, there are many additional challenges to earn medals, e.g. visiting 10 zones in as short a time as possible; visiting more than 50 zones in a day; visiting a zone every hour for 12 hours (I don’t have that one).

You can use Turf for training by deciding on a particular route and then running round, maybe comparing your time from run to run, or you can mix things up for variety. It’s great for practising map memory, or for refining your decision-making for score events. Or you can just go for a gentle walk and take some zones on the way.

Running out of new places to go during lockdown, I was very pleased to see that the Swedish guys who run the Turf game were recently setting up dozens more turf zones in Edinburgh – see the screen shot. The red ones have been taken (not all by me); the yellow ones are neutral. There’s good coverage over the whole city now. We’ve enjoyed exploring to find the new zones, and many of them are in interesting places we didn’t know about. So if you live in Edinburgh, there’s a turf zone near you.

What the game needs is more competition. A few other orienteers have registered, but not many as yet, and it would be great to have a thriving community.
See this Wikipedia article for more description. Or the Turf website has lots of further details.
To get started, just download the app and follow the instructions. Hope to have some more players soon! 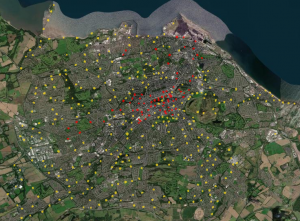