On a blustery damp evening about half a dozen club stalwarts congregated at the Riccarton Inn ready for a run. Head torches were suitably charged ready for the first run in the dark evenings of the season.

Martin Caldwell had couple of suggested routes with notes to aid navigation. The shorter one stayed in the streets of Currie, and Eleanor commented very favourably on how much grass and open spaces Martin had utilised, whilst the longer one went down into the Heriot Watt campus. Martin's added extra option was not implemented, as none of the fastest runners turned up. People went out in twos or threes according to ability, but in some cases groups split up or met up whilst out. But as usual everyone took care of each other to ensure everyone was counted back. Les tripped over his shoe lace - fortunately with no serious damage this time (on a previous occasion he tripped in snow so he and Andrew missed their Burns Supper as Les need hospital attention).

Only a few people took the dining option, though most remained for a drink. And we were joined by others, including Sally and Crawford for the bimonthly distribution of the ESOC newsletters - for those who prefer to have the real thing in their hand to read. Every little helps to keep the distribution costs down.

Some of us took a different method of getting our exercise for the day. Ewart came up the Water of Leith from Juniper Green doing some geocaching, and took the photo of the picturesque Currie Kirk which accompanies this story. I had just got back from a very interesting geology walk along the Fife Coastal Path near St Andrews. We were looking for 350 million year old mating tracks of 2 giant (about a metre long) millipedes. They were clearly visible from the top of the cliffs in the rocks on the beach below and have only recently been found.

The evening ended with a very convivial discussion in a nice warm pub, ranging far beyond orienteering. Thanks to everyone who came (a total of 12), which makes the effort which goes into organising the socials worthwhile. 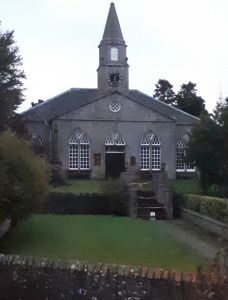