It wasn’t possible to hold the Scottish Relays alongside the Scottish Individual Championships earlier in the year, and since Forth Valley Orienteers were already staging an open relay event, they agreed that this could be used to contest the Scottish Men’s and Women’s Open relay titles. They also provided a shorter option with legs of TD2/TD3/TD4 (Yellow/Orange/Light Green), allowing an Ad Hoc class and Junior class, with junior trophies being awarded to the first M/W44- and M/W36- teams. The Age Class Championship and Junior Championship (handicap relay) trophies were not included this year.

Fairy Knowe and Doon Hill lies to the south of Aberfoyle, and has varied terrain, with hills and flatter marshy areas, ancient oak woodland, younger mixed woodland and coniferous plantation. Everyone enjoyed the event and several commented that the terrain was great. The weather was beautiful – sunny and clear.

Full results are available on the Open Relays results page of the FVO website.

Alison O'Neil (ESOC Club Captain) writes:
"This was my debut outing as ESOC Club Captain, and the first mission was to recruit team members with 2 weeks' notice. After much WhatsApping, wheedling, and some last-minute COVID-related reorganisation, we ended up with 21 ESOC members making up 7 teams - 1 junior, 3 Ad-Hoc, 2 Men's and 1 Women's. By the end there was no parent left at a loose end, with all ESOC attendees in action.
Some delightful relay planning made the most of the runnable deciduous parts of Fairy Knowe and Doone Hill, with a nice mix of easier and harder legs on the open courses. The technically easier courses offered interesting route choice and some fine scenery.
We had great success in the Ad-Hoc competition with a 3rd place for newcomer Matt alongside club stalwarts Judy and Roger. The junior team also did brilliantly: Megan stormed in on the 1st Yellow leg in 2nd place, with Calum bringing us back in 4th on the Orange 2nd leg, and Maja finally coming home 7th - being the first girl on the final L Green course. The women's and men's teams got around safely in respectable times - and with a high rate of mispunching on the women's course the ESOC team of myself, Sabine and Hanne came 4th behind EUOCx2 and FVO. Just 1 more disqualification and we could have medalled... certainly a more realistic thought than the 50 minute shortfall we would have needed to make up for a legit 3rd place :) Congratulations to Rachel Brown who was a member of the winning EUOC trio under her new academic affiliation! Congratulations also to Craig/Walter/Simon and Keith/Mark/Richard who came 10th and 13th respectively, with the FVO-EUOC positioning reversed in the men's race. Top 10 in the UK (OK, maybe just Scotland...) is not bad!
Great work all. Looking forward to our upcoming team exploits in 2022!"

There's also a report from this event on the Scottish Orienteering website. 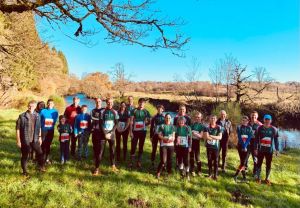 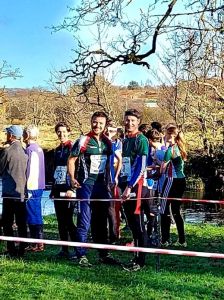 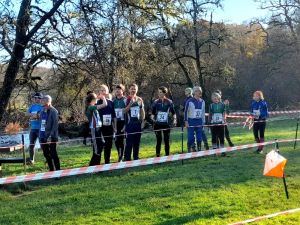