The 2018 Scottish Sprint Championships consisted of 2 separate races on the Stirling University campus, with the times combined to give the final results. This event was organised by Forth Valley Orienteers, as the first part of their “Stepping into Spring” weekend, and it was also SOUL 4.

Stirling University has a very attractive campus, with the modern university buildings and accommodation blocks set around a large loch, amongst many trees, gardens, and large expanses of sloping lawns criss-crossed by paths and access roads. The event centre was at the Logie Lecture Theatre, where there was plenty of space to leave bags and get changed, and it was a good venue for the prizegiving later on. Many enjoyed the university cafes between races.

The start for the first race was nearby, on the west side of the campus near the athletics track, and courses immediately led into a group of confusingly similar chalets, then up into the southern part of the main campus, looping around the parkland and buildings to finish beside the event centre.

The start for the second race was across the campus, at the NE corner, and the courses led back around the loch through varied terrain including complex accommodation blocks, fairly wild woodland with big crags, undulating parkland and (for most) a bridge over the loch before the final few controls leading in to the same finish as the first race.

Off the paths, it was very wet underfoot, and slippery too, with lots of mud. The weather was unfortunately cold and rainy all day, though the rain did ease off a little at times.

Full results from both races, plus Routegadget and other analysis, are available on the Scottish Sprint Championships results page of the Forth Valley Orienteers website. 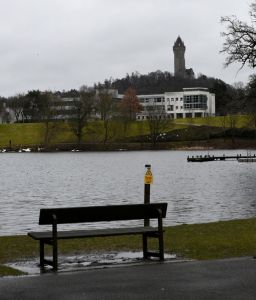 View across western part of loch - Wallace Monument behind 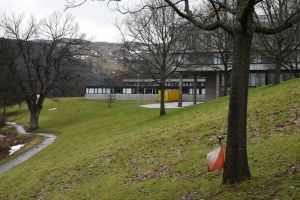 Control 210 (tree on south side of loch)