SOUL 1 was organised by Masterplan Adventure. Kinlochleven is in Lochaber, at the east end of Loch Leven, north of Glen Coe, and this event was part of the Salomon Skyline Scotland festival, based in the town. The terrain was described as “Interesting mix of urban, parks and woods”.

There was a very small entry for this event, and only 2 ESOC members were there. Calum Robertson was the only entrant in his class, MYJ 12-, and David Robertson had entered MSV 55+, but was unfortunately given the wrong map so was non-competitive.

Calum reports:
“On Saturday 18th September I went to Kinlochleven to take part in the first SOUL event of this year. We stayed in Kinlochleven over the Scottish 6 Days week so I knew quite a lot about it from walks and Turfing. This was the  Salomon Skyline weekend so the town was busy with runners. We saw the first women finishing their Ring of Steall run, and saw Alistair Thomas (EUOC) there after he had won the Vertical Kilometre race. There was a small tented village and the event start and finish at The Ice Factor.
Scottish Orienteering had a tent on the green nearby and the SOUL start and finish were near there. It was a bright day but we did get a brief shower whilst we were about to start. This is a new 1:4000 map by Graham Gristwood with 2.5m contours. My course was set in the housing in the south bit of the town, out around the football pitch and back along the river, over the bridge to the north side and back. There were not many entries for the SOUL and I ended up the only one doing my course.
After our run we stopped at Loch Leven because it was so still it really was like a mirror.”

Results are available here, and some details about the event are on the Masterplan Adventure website. 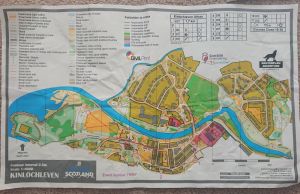 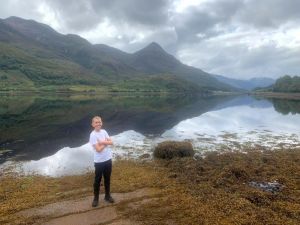 Loch Leven and the Pap of Glencoe