Tayside Orienteers organise an annual mass-start score event at Christmas. The 2017 event was at Blackspout Wood, on the south side of Pitlochry. This is a small area of deciduous woodland, sloping southwest, which is dissected by two deep valleys, one of which is the ravine of the Black Spout waterfall. There’s a good network of paths, but limited options for crossing the two streams.

The weather was very cold, with clear skies and sunshine – a beautiful winter day. The ground was mostly frozen hard and there was a light snow cover or frost everywhere, with an impressive view from one of the control sites of the waterfall and surrounding ice.

There was a 45 minute time limit for the Short course (26 controls available), and 60 minutes for the Long (30 controls available), with control values ranging from 10 to 40 points. Bonus points were awarded for meeting the elusive Christmas Fairy, but only if you were wearing something Christmassy.

Most people did have some seasonal touches such as santa hats, tinsel, or elf costumes, and many stayed on for the carvery lunch in the splendid surroundings of the Atholl Palace Hotel. This was accompanied by some tricky quizzes, one 30-themed (to celebrate TAY’s 30th anniversary) and the other about the locations of the Scottish Orienteering Championships over the last 30 years.

Most of the ESOC competitors did the Long course, where there were 60 competitors. Andrew Lindsay won the overall prize, and Rona Lindsay came 3rd (1st woman). Others in the top half of the results were Jim Martin (7th), Finlay Ross (9th), Keith Brown (10th), Ben Brown (15th), Rachel Brown (21st), Heather Thomson (25th), Les Dalgleish (28th) and Timothy May (29th).

Full results and other details about the event are on the 2017 Christmas Score page on the TAY website. 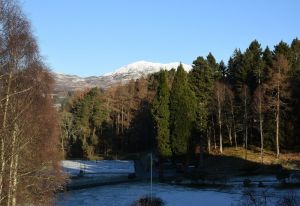 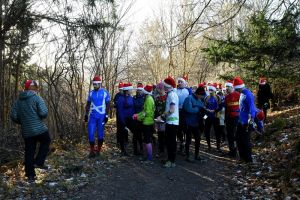 Waiting for the mass start 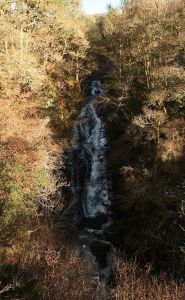