The 2018 TAY Christmas Score event was at St Magdalene Hill, on the southwest edge of Perth.
It’s a small area on the side of the hill, in three parts. The northern part, downhill from the start, has fairly thick woodland; the middle part is rough open (with some very thick, scratchy vegetation including brambles) and mixed woodland; the southern part, reached via a footbridge over the motorway, has woodland and open pasture on the top of the hill. The weather was fine, though chilly, and there were good views, especially from the fields at the top. Underfoot conditions were generally good, with a few damp patches.

There was a 45 minute time limit for the Short course (20 controls available), and 60 minutes for the Long (30 controls available), with control values ranging from 10 to 40 points. Bonus points were awarded for meeting the elusive Christmas Fairy or Santa, who wandered around the area, and there were extra bonus points for those wearing some kind of fancy dress. Most people were wearing santa hats or tinsel, and some had more elaborate costumes. Many went for lunch afterwards at Broxden Farm, just along the road, where the prizegiving took place. There was also a quiz, about different plants that might be encountered on an orienteering course.

Most of the ESOC competitors did the Long course, where there were 43 competitors. Andrew Lindsay won the overall prize, with the maximum score of 680 points. Others in the top half of the results were Finlay Ross (10th), Jim Martin (11th), and Clive Masson (13th)

Full results and other details about the event are on the 2018 Christmas Score page on the Tayside Orienteers website. 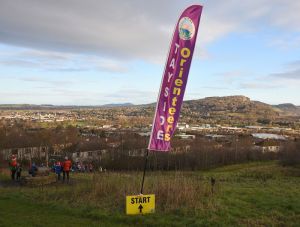