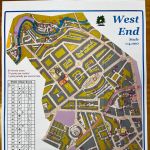 A world first for ESOC happened on Tuesday evening (26 April) with our first combined urban score orienteering + Turf event + social format.  Two completely separate events, both running 7pm to 8pm, and both finishing up at the same place so that club members could enjoy some well deserved refreshments.  It was great to see so many people along and having fun.

In the orienteering race, runners navigated the Exchange district of Edinburgh, west of Lothian Road, and the tricky terrain of the Dean Village.  Each of the 38 controls had the same value (10 points), and the penalties for being late back after the 60 minutes was a crippling and brutal 1 point per every second.  As a result, nobody was late back!  Alistair Black timed it best with only 8 seconds to spare in a nailbiting finish as the clock counted down.  I planned the event so as not to space the controls evenly, partly because there is a section of the map (around Melville Street) that isn’t very technical for urban orienteering, and I also then wanted to reward people who went all the way to the Dean Village, so I put lots of controls close together there.  I used yellow/green electrical tape to mark the controls, which was quite easy to do, although not always quite so easy to find, especially when attached to a dark green thicket, etc.

Contemporaneously, a Turf battle was ongoing for the same hour, with ESOC members battling it out for zones, also in the Exchange and Dean Village.  A Turf event is a score event too (i.e. get as many as you can, in any order, within a time limit).  However, the controls are called “zones” and are registered using GPS, so there is nothing to see on the ground when you get there and you navigate using an app on your phone.  It takes 30 seconds to “take” a zone, and then it is “blocked” for 3 minutes, so nobody else can visit it in that period.  This means that as well as finding your way to the zones, you need to keep a close eye on other competitors, so that you can take zones off them / keep out of their way!  You get points for taking zones, and also points for “holding” them, so if you successfully take zones and keep them, it can make all the difference to the leaderboard.
Details of how a Turf event works are in this document: Participating in a Turf Event

I experimented with some unusual zone shapes, and in some cases spanning two streets, so they could be taken from different places. The event map and full results are available on the ESOC FTT#2 Event page on the Turf website.

We also had a few members turn up only for the refreshments and to offer their insights to the post-race analysis!

More of the same is coming up on Tuesday 17 May, centred around the Toby Carvery (Howden Hall Road), opposite the Mortonhall Crematorium entrance.  Planners are Alison O’Neil (o event) and Mark Rowe (foot Turf event), and timing will be the same, so 7pm to 8pm, with refreshments afterwards at the Toby Carvery.  Come along!  There is LITERALLY something for everyone!

Thanks to everyone who made it and it was great to see you all. 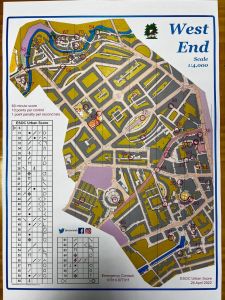