Following on from our unexpected success in the March regional competition against Skåne, Scotland entered the multi-region competition that takes place each September. Previously this has been a battle between Swedish regions, but it’s now been renamed in recognition of the international entry. Scotland were competing with 6 teams from various parts of Sweden, a team from Finland, and also a team from Minnesota.

The competition started on Sunday 5 September, at the start of the new Turf round, and finished 4 weeks later, at 11am on Sunday 3 October.

The rules were broadly similar to the March competition. There were 3 separate scoring categories: turf points, number of takes, and number of round unique zones (i.e. zones that individuals hadn’t already visited in the September round). For each of these 3 disciplines, the scores were calculated from the average of the top 75% of the team on a week-by-week basis, and also for the whole month.

In Week 1, Scotland got off to a good start, scoring 29 points, second only to Åland with 32 points. At the end of Week 2, at the halfway point in the competition, Scotland were still in 2nd place (just one point behind Åland), having gained 30 points that week after many hours of dedicated turfing. Week 3 saw some of the other teams redouble their efforts, and Scotland gained 28 points, still in 2nd place overall. The final week was a hectic scramble for round unique zones – Scotland had won this category every week, but could not quite match Västmanland that week. Once again, Team Scotland turfers executed continuous circuits late into the night on the final weekend to maximise the score on takes, and the Week 4 score was again 28 points. Scores were also calculated for the whole month, giving Scotland another 28 points. This brought Scotland’s overall score to 143, in second place to Åland with 150 points. Västmanland came third, with 124 points.

Well done to Team Scotland, and thanks to the other teams for such great competition! Everyone enjoyed exploring new places, and this time they could venture further afield. There were lots of big medals won, including several turfers gaining the fearsome Staminatrix medal (400 zones in 24 hours). A number of ESOC members were major players in the Scotland team, and the Team Captain was ESOC member Artful. At the end of the round, there were Scottish turfers in the top 4 places on the World leaderboard, and several others in the top 15 - ESOC members féarglas, Rocky&Fed, and kjtindall featured here, and Artful himself took the gold medal!

See Turfportalen for the final position and an explanation of the rules and scoring. There are separate tabs for the scoreboard, overall totals, and each week of the competition. Click on a team name for a full team list and individual totals.

See this article on the ESOC website for more about the March regional competition. 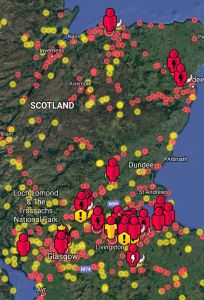