TURFEMBRA 02 was planned and organised by ESOC member Artful around his home turf of Livingston, with assistance from féarglas. The event ran from 7 till 8:30pm on Thursday 22 July. It was open to foot or cycle turfers, and the event area was about 5km by 3km, in the Deans area of north Livingston. Most of the zones were off road. They were all south of the A89, though there were some between it and the M8. Despite many being away on holiday, there were 18 participants (one shadowing).

Most reconvened at the end below Dechmont Law, and there were prizes for ESOCJeneral (bike winner – 1366 points from 46 takes), SeaTurtle (junior winner – 743 points from 36 takes) and bythesea (foot winner – 671 points from 25 takes), and wooden spoons were presented to ESOCJanet and TheLovelet.

The event map and full results are available on the TURFEMBRA 02 Event page on the Turf website.
Details of how a Turf event works are in this document: Participating in a Turf Event
Also see this news item for a report from the previous event.

CSL was attending his first Turf event, and came 4th, with 1139 points from 45 takes. He commented “I enjoyed the event – cycling in Livingston is great, with so many pathways. I had no idea where would be best to start and was still by my car as 7pm approached. Everyone else seemed to have scattered around Livingston so I was delighted to find an event zone appeared just 50m away from where I was. With 30 seconds take time, there was plenty of time to plan where to go next and I was able to take a series of zones without anyone getting in my way. This luckily continued, but I was slowed down by some tricky zone placements at the station and a hideous path in the east of the area. Thanks to Artful - looking forward to another event!" 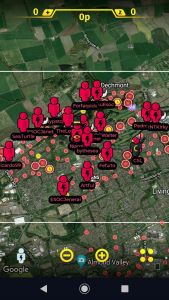 Turf map of Livingston during the event 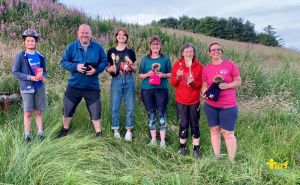