CSL organised a Turf event on the afternoon following the Edinburgh City Race (see this news item) – it took place from 3 till 4:30 pm. There was a great entry, with 30 participants including several out of town turfing orienteers who were visiting for the Big Weekend. There were 106 event zones, stretching from the West End through Fountainbridge, Bruntsfield and Marchmont to the Grange, and including The Meadows, but no further north due to the WOC 2024 embargo. The weather was mostly cloudy, and quite chilly.

CSL reported:
“Thank you to everyone for coming. Sorry for the dearth of zones in the Grange – it really is a desert, and I had to base some event zones on real zone locations. As usual, thinking of names was the hardest part, so some were quite obscure. It was interesting to see where people went during the event – the turf map looked very busy.”

At the end, most returned to the event base for the prizegiving, The winners were Elsiespanner (999 points from 54 takes, by bike) and ZulaTheAlien:) (668 points from 33 takes, on foot). A spot prize was also awarded to Aibo for taking the last neutral event zone. Then there were group takes at the Bruntsfield zone and the WarrenderPark zone, where many participants gained a Crowdy-13 medal.

The event map and full results are available on the TurfEmbra05 Event page on the Turf website.

Details of how a Turf event works are in this document: Participating in a Turf Event
Also see this news item for a report from the previous Turf event in Edinburgh. 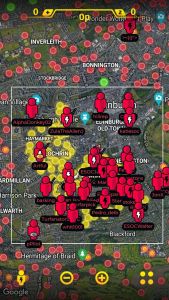 At the start of the event 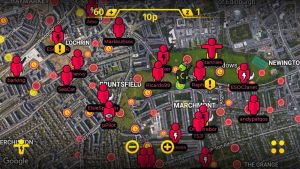 Action during the event 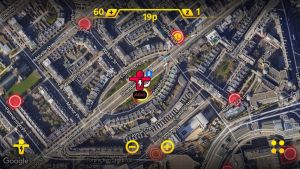