TurfEmbra07 was planned by Mark Rowe (MarkkuEsoc), and took place on Tuesday 28 June from 19:00 till 20:30, centred around St. Katherine’s Park, Liberton.

15 turfers positioned themselves ready for the start, and were soon rushing around the area, taking zones in a wide variety of  terrain. The area was a rough diamond shape, bounded by Gilmerton Road on the NE side, with zones distributed through the various housing developments across to Burdiehouse Road in the south, and to Mortonhall Caravan Site and Alnwickhill on the west side. There were 78 zones, ingeniously named after turfers, and there was a spot prize for the person who was first to take the zone named after themselves. This went to ZulaTheAlien:), who happened to start right beside the appropriate zone. The weather was dull and quite windy, but luckily the threatened rain held off, though some got very wet when turfing their way home afterwards.

At the end of the event, everyone returned to the zone KisaKat in St Katherine's Park for introductions and chat. We were delighted to welcome some long distance turfers, from Texas (USA) and South Glasgow as well as those more local to Edinburgh. The prizewinners were:
Foot – ESOCKisaKat (junior), ZulaTheAlien:) (senior)
Bike – CoolEsocAds (junior), Hodge (senior)
This was followed by a Crowdy at KisaKat, which had been specially extended for the occasion.

The event map and full results are available on the TurfEmbra07 Event page on the Turf website.
Details of how a Turf event works are in this document: Participating in a Turf Event
Also see this news item for a report from the previous Turf event in Edinburgh.

The extended KisaKat zone, ready for a Crowdy 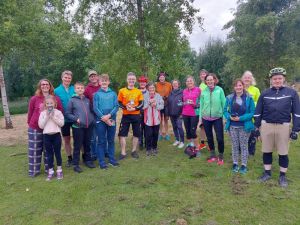