I got this question passed on from the ESOC WhatsApp Turf group: "What happens when lots and lots of people are turfing in one area? Does it ever become too many?! Or should people not mind that zones get taken more because they can re-take them? And does the number of zones keep increasing so that the density increases? Or at some point are there no new zones?"

There are so many answers to these questions that a whole article is needed!

What turf looks like is different from town to town and for large towns, district to district. In some places, there is just one lonely turfer who is forced to do revisits. I was that turfer for a few periods in 2012/2013. That sucks. In other places, you can barely walk out the door without the risk of being rammed by an army of bike turfers which never seems to eat or sleep. I haven’t experienced that yet, but have come close.

In a perfect turf world, there would be zones equidistant 250 metres from each other in the whole urban area in any town. 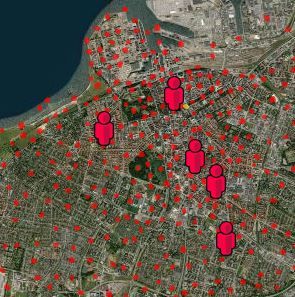 Densely packed zones in Malmö In reality, size of town, geography and the urban layout sets limitations. Eventually, any town with turf zones will be “full”. In Sweden, we have reached or almost reached this state in several towns. What we have done with zone making in Sweden in the past five years or so is that each municipality (“area” in Turf) has a quota – a fixed new zone allocation. In Sweden, zone-makers are responsible for municipalities on a rotational basis, so every four months we rotate and get a new quota. The summer quota is slightly larger than the autumn and spring quotas, but for a town like Malmö it is a quota of some 6-8 new zones in a 4 month period. But you can use the Turf forum to apply for extra zones to build a loop outside the town or connecting two towns.

So, what happens when a town goes from Turf desert to Turf (over)crowded? It all depends on you!
There are a number of factors at play …

Understanding the fairness in Turf
This is simple. And yet hard. Turf is not fair. And the sooner you accept that, the sooner you are going to enjoy Turf regardless of activity level. Turfers in large cities will always have an advantage over turfers in small towns, due to the former having access to a large number of zones which are taken often. Bike turfers will always have an advantage over foot turfers. And maybe the most important factor, the guy with most spare time wins. In Skåne, Király is winning time after time not because he is the most physically fit turfer or the fastest turfer, but because he lives in a large town (which is unfairly flat on top of that!), he bikes and he has oceans of time. He doesn’t do anything but turf, eat and sleep.

What you need to do in order to balance the unfairness is finding your motivation.

Motivation
Why do you turf? Is it because you want to compete and win or maybe avoid getting relegated from your league? Is it because you want a more rewarding way to do boring exercise? Is it to see new places? Or, is it your way to relax and calm down after a busy day at work or even meditate a little? In some cases, it’s several of these, or maybe it’s different from round to round. But you need to ask yourself why you are turfing, i.e. what is so appealing about chasing virtual things that don’t exist in the real world?! When you know that, you can select the strategy to handle increased activity that works best for you.

But first all the annoyances.

Turf irritation
Turf stirs up emotion, and our Swedish Facebook Turf group is nothing but a whining bucket! You may not have experienced this so much yet, but you will as activity increases. You will eventually be irritated over things like the following:

It’s a game. It’s unfair. And none of the things listed are against any rules. It’s really not worth getting upset over. But we are humans, and it’s a natural basic reaction. In some cases, there may be perfectly good reason for the behaviour that irritates you. The person who blocks you when you are about to join for an assist is possibly a pocket turfer, maybe meditating with music and has no clue what’s going on around him/her. iPhone users need to actively set up the app to keep the turfman visible between zones. And the guy who seemingly steals all your zones immediately after you turn off might only have that window during the day available for turf and was maybe equally irritated over how slow you were to complete your session! In any event, try not to be irritated.  I have experienced all the above and been as irritated as everyone else, but over time I have calmed down. And now I enjoy turf much more. The last case might be difficult. I had to tell the person that I needed some alone time and politely thanked for the company.

So now that you might have reflected over the unfairness of Turf, what motivates you and awareness of Turf things that get you irritated, let’s look at how you deal with these questions: What happens when lots and lots of people are turfing in one area? Does it ever become too many?! 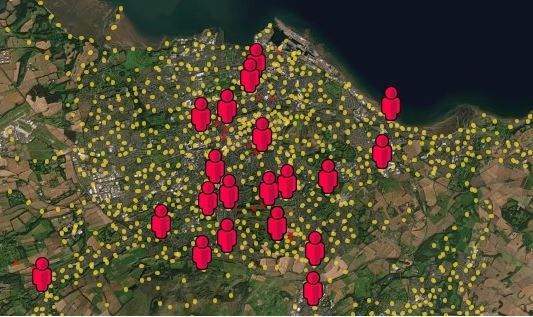 The first thing that happens when activity increase in an area is that Points Per Hour (PPH) and the likelihood of running into blocked zones goes up. These changes will mainly affect those whose motivation to turf is competition and those whose motivation is exercise. The competitive turfers want points. With increased activity, the take points will be lower. They will shift their turfing towards late evenings and do anything to be the person who holds the zones with high PPH overnight. They will eventually evolve into what we in Sweden call “nattslemmare”, which is the “slimy” person who gets the last take before morning! These people will also be sources of irritation, but unless you are willing to take the fight and try to be the last man standing, accept it.

The ones who turf for exercise will be irritated over blocks. They want a clear path without obstacles. As activity increases, this will become more difficult. They will need to either move their turfing to zones with low PPH (and thus contribute to those eventually getting higher PPH) and/or shift towards morning turf to avoid annoying blockers.

The point here is that both groups are adjusting, something humans are quite good at. If increased activity gets in the way of your motivation to turf, you need to adjust as well. There are a few ways to do this:

Until the town is “full”, zone makers will also try to keep up with increased activity by adding more zones. But this can only go on until there are no places left to put zones in. Then what?
Can there be too many turfers? I don’t think so. People adjust and sure, some people might get tired of having difficulties finding unblocked zones and quit or take a break, but generally it seems to work out. I know this because we have the crazy town of Västerås in Sweden. 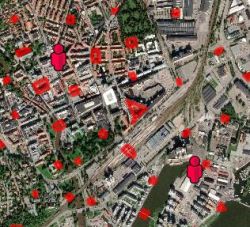 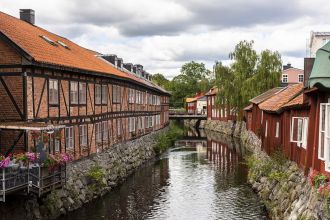 Only the zones on the outskirts are of any value other than 65/+9. The SkrapanZone (see above) has been taken almost 50,000 times (and Turf just turned 10 years old last year). I don’t know how many turfers are active there, but there are a lot of them in an area which is just a fraction of the size of Edinburgh. They have mainly been coping with this high level of activity by moving and spreading out, and moving their turfing time (there are almost always folks out turfing there, around the clock). Zone makers have also plugged all available holes, but now it is very difficult to find any spots where you could put new zones.
As long as the guys and gals of Västerås keep going, you won’t have a problem. Just be aware of irritation which will increase when activity increases. Remind irritated friends that it’s just a game!

Finally, Should people not mind that zones get taken more because they can re-take them?
When people ask me what’s the goal or purpose of Turf, I usually answer "The goal with Turf is to try to lose zones as quickly as possible so you can take them back and gain even more points!"
Remember the lonely turfer all by himself in a lonely town...