March saw a Turf competition between Scotland and Skåne – see this news item for more details. The competition ran from Sunday 7 March until Sunday 4 April, with points awarded each week in 3 categories, plus 3 additional points for the overall totals in each category, making 15 points in all.

Skåne (in southern Sweden) challenged us back in September, when there were still only a few dozen turfers in Scotland, and most of them were ESOC members. Since then, there’s been a huge expansion in the number of UK turfers. There were 119 in the Scotland competition team, including 20 ESOC members, as well as orienteers from other Scottish clubs. And there was one ESOC member in the Skåne team too!

Week 1 saw some impressive performances from various ESOC turfers. There was frantic activity on Saturday 13 March as Team Scotland attempted to match the Skåne average of zones taken. Eventually, after some huge turf runs, and a good deal of valiant overnight action, the Scotland total crept past Skåne’s. However, on Sunday morning, many more Skåne turfers joined the fray and Week 1 ended with Skåne leading in 2 out of the 3 categories, so the score then was Skåne 2; Scotland 1.

Team Scotland enjoyed the pleasant spring conditions in Week 2, and gradually built up a lead in all 3 categories. The morning of Sunday 21 March saw a final effort to maintain this position, and to everyone’s surprise, this was successful, bringing the score to Scotland 4, Skåne 2.

Skåne forged ahead in Week 3, and Scotland worked hard to catch up. Many Team Scotland members were out late on Saturday evening (wet and windy) and/or early on Sunday morning (even windier, and with the added disadvantage of having to get up an hour early after changing the clocks). Scotland overtook for a while, but in the end Skåne won 2 categories, so the score at the end of Week 3 was Scotland 5, Skåne 4.

Week 4 brought continuing great efforts from Team Scotland, who gained a narrow lead early in the week, then lost it again as the Skåne team efficiently gained ground. The Easter weekend holidays at the end of the week gave the opportunity for some great exploits, with groups of Team Scotland turfers executing continuous circuits in various different areas, late into the night. This increased our takes count considerably, and on Sunday 4 April there was a last-ditch attempt to find more round unique zones (i.e. those that individuals hadn’t already visited). To everyone’s astonishment and delight, even this total passed Skåne’s, giving Scotland the win in all 3 categories for Week 4 and also the overall totals. The final score was Scotland 11, Skåne 4.

Well done to Team Scotland, and thanks to Skåne for being such formidable opponents! They kept up the challenge until the very end. Everyone in Team Scotland seems to have enjoyed the round, with many commenting on all the new places they’d found in their local area while continuing the quest for zones. Many impressive medals were won, and most team members went through several new ranks.

Thanks to Thea Thomas for the Turf Scotland logo. 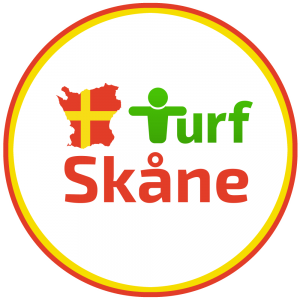