Turf - The Art of Armpitying

Armpitying (verb of armpit) is a special technique that is used in specific Turf circumstances. But before we get into the details of that, we need to talk about cheating…

As long as humans have competed, there have been cheaters. Some Greek marathon runners likely had horses hidden in the bushes along the way, and we all remember the famous Hand of God in the 1986 World Cup. The few times I ever orienteered were at school some 200 years ago, and we all had magnetic compasses, paper maps and the control points had a stapler/punch with a unique pattern which you used to staple/punch a piece of paper to prove that you been at the control point (I guess you have more modern tools now?). I can imagine that every now and then someone sniffed up which staplers were used where and had their own set hidden in the bushes and could compete much faster by not having to visit all control points.

Turf is similar to orienteering in that you must visit a zone (control point) in order to get points. There is in fact only one rule in turf: you must physically be present in the zone you (your turf account) takes over. Everything else is cheating.

On the morning of 21 August 2020, ESOC turfer Hodge in Penicuik woke up and discovered a new turfer Snahrk had taken some of his zones. Hodge was no doubt delighted that there now was another local turfer he could steal zones from on a daily basis. 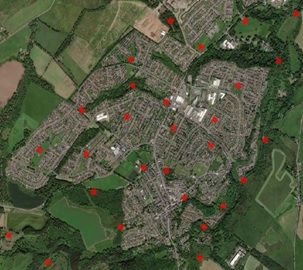 Penicuik turf zonesBut the turfer never reappeared... A quick look at the zones Snahrk possessed might have told Hodge that something wasn’t right. Snahrk seemed to have taken zones in the Nordic countries the evening before, and then in Penicuik during the night. Although not entirely impossible, highly improbable. But there was more…. An hour after visiting Penicuik, the same turfer took a zone in Paraguay!
There could only be one of two explanations: Snahrk was either an astronaut at the ISS or else was cheating. And I can tell you, Snahrk was not an astronaut.  Snahrk is what we call a “desktop turfer”.  It is not that difficult to fool a smartphone or a smartphone app that you are somewhere else. The amazing thing is that everyone who tries this with turf thinks they are the first one to think that out. Cheaters like this appear quite often. We capture them mainly by automatic means (impossible travel speed for instance) or by vigilant turfers.

Please note, however, that the opposite is perfectly fine, which is perhaps not what you would expect. This means that a turfer who is alone in a town is allowed to have two different turf accounts and use one account to take zones from their other account. No problem, as in both cases the turfer is in the zone with an account they own when they take the zone.

So, now that we know what cheating in Turf looks like, let’s return to armpitying.

Imagine you are on the train from Edinburgh to Glasgow (although, why would you ever want to leave such a lovely city?). The train passes, but does not stop in, a location which has a zone on the railway station. No chance to take the zone, right?
Wrong!
Armpitying is the fine art of calculating when your smartphone’s GPS will stop reacting if you block its reception! By pressing the smartphone up into your armpit! (Or sit on it, which is called something else). If you time this perfectly, your turfman will keep moving for a second or two and then stop dead in the centre of the zone, until you release it from your armpit. Zone taken!
You could argue that this is cheating, because you are no longer in the zone when the takeover happens. But since you were at some point, and since it is so damn difficult, we don’t consider this a crime, but rather fine turf craftmanship!

We have a lady in our region who travels to her boyfriend by train every weekend. She has perfected this such that she can take all zones en route, including the ones that merely touch the tracks with a millimetre or two. All hail Ita, the uncrowned queen of armpitying!

Keep the turfin’ up!